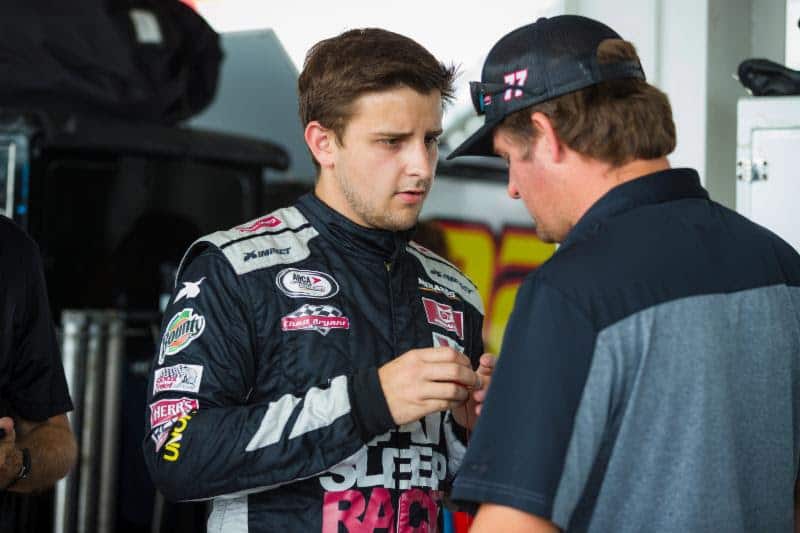 LONG POND, Pa. – After a two-race rough patch, Joe Graf Jr. (@joegrafjr) and his Chad Bryant Racing team invade Pocono (Pa.) Raceway for Friday afternoon’s General Tire #AnywhereIsPossible 200 looking to get their season back on track and thrust Graf Jr. back into the championship fight.

From a season-high sixth-place finish at Fairgrounds Speedway Nashville to being involved in a multi-car crash at Toledo and suffering engine woes last week at Charlotte – the setbacks have certainly shaken the team’s momentum – but not their faith.

On Wednesday, Graf Jr. joined his Chad Bryant Racing teammates Corey Heim and Ty Majeski for a several-hour test at the 2.5-mile triangle and while the speed in his No. 77 EAT SLEEP RACE Ford Fusion was only 10th quickest overall, 20-year-old Graf Jr. isn’t worried.

“Overall, it was a productive test,” said Graf Jr. who sits fifth in the championship standings. “We were working on long-run speed in our No. 77 EAT SLEEP RACE Ford and we were preparing to make our mock qualifying run and then the storms came.

“So, while we ended the test 10th quickest overall, I’m optimistic that we can have a super performance on Friday afternoon.”

Graf made two starts at the “Tricky Triangle” in 2018, and while a track-best 11th wasn’t exactly satisfying for Graf and his CBR team, Graf Jr. believes his track experience will pay dividends in the 80-lap race Friday afternoon.

“Pocono is so unique, it’s a race track that I just embrace and love to race at,” added Graf. “Each of the three turns are so different and you really have to set yourself up perfectly to get through the turns to set you up for the run on the straightaways.

“We felt content with our lap times during our long race pace. I think we still have some work to do during practice on Friday morning, but I think we’ll get there and have a good day on Friday.”

For the eighth straight race, EAT SLEEP RACE, a racing lifestyle apparel company headquartered in New Jersey returns as the primary sponsor of Graf Jr.’s No. 77 Ford Fusion for the 200-mile race.

Since 2001, EAT SLEEP RACE has offered a full product line including accessories and apparel for men’s and ladies. As one of the pioneers of motorsports apparel, the brand has deep roots in the racing industry and was created to offer fresh designs for all racing enthusiasts.

“I’m really proud of how we’ve been able to get the EAT SLEEP RACE name out there in a short amount of time,” added Graf. “I’m really happy to be representing them as their brand really fits my lifestyle.

“We’ve done a lot when it comes to activation at the race track and on social media and it helped the bigger picture. Our plastic bag awareness campaign from Daytona was a monstrous success and we’ll look to do things like that throughout the season.”

Team owner and crew chief Chad Bryant says he is seeing calmness and focus out of his sophomore ARCA driver and he hopes his determination will lead to on-track success.

“While we were OK with our test results on Wednesday, we all want more and that’s a positive,” added Bryant. “Joe seems to get more comfortable with Pocono with every passing lap. We’ll make some tweaks on the car from the test to race day and hope Joe approves.

“There’s still a lot of racing left and opportunity to put our No. 77 team front and center where we feel like we belong and our chance at Victory Lane. There’s no quit in our race team, I promise you that.”

For this weekend at Pocono, Graf will carry the in-car camera myFace logos for his third start at Pocono Raceway. myFace is a leading non-profit organization dedicated to transforming the lives of patients with craniofacial conditions.

Every hour a child is born in the United States with a craniofacial difference, which uniquely impacts both the body and spirit. In the U.S. approximately 600,000 individuals have been diagnosed with a craniofacial condition.
For more on Joe Graf Jr, please like him on Facebook (Joe Graf Jr.) and follow him on Twitter (@JoeGrafJr) and visit his brand new website at JoeGrafJr.com.

The General Tire #AnywhereIsPossible 200 (80 laps | 200 miles) is the eighth of 20 races on the 2019 ARCA Racing Series presented by Menards schedule. Practice begins Fri., May 31 with an hour practice session from 9:00 a.m. – 10:00 a.m. General Tire pole qualifying is set for later in the day at 12:00 p.m. The race is set to take the green flag later in the day shortly after 5:45 p.m. The event will be televised live on FOX Sports 2 (FS2) with same day coverage on FOX Sports 1 (FS1) at 8:00 p.m. ARCARacing.com will also stream live timing and scoring throughout the day’s festivities. All times are local (Eastern).

EAT SLEEP RACE (eatsleeprace.com) is a racing lifestyle apparel company based out of New Jersey. Since 2001 the brand has offered a full product line including accessories and apparel for men’s and ladies. As one of the pioneers of motorsports apparel, the brand has deep roots in the racing industry and was created to offer fresh designs for all racing enthusiasts.