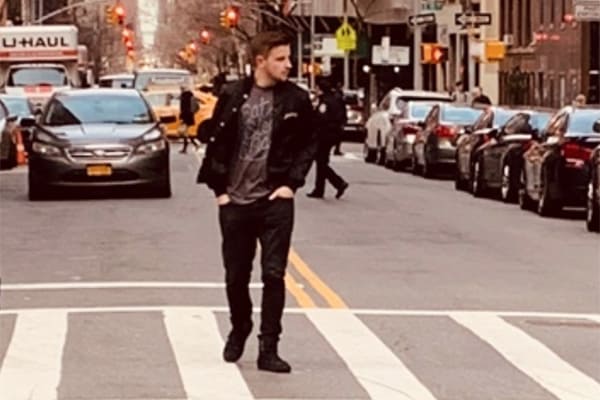 MOORESVILLE, N.C. — For most of his teenage years Joe Graf Jr. grew up in Mahwah, N.J., a quick 30-minute commute to New York City. Little did he know that when he enrolled in college at New York University (NYU) last fall that his life would change dramatically.

Graf knew that an education was something he needed to continue his growth and development as a race car driver and when he selected NYU, he would replace the green lawns and suburban lifestyle of Mahwah for an edgier New York City one.

New York University is located in the heart of Greenwich Village. An area notorious for the arts, free spirit and one of the most diverse group of individuals you will ever find. Graf has always been a free spirit of sorts but NYC can take the experience to a whole new level.

“I wasn’t sure what it was going to be like when I moved into the dorm,” said Graf. “I guess my first reality check was when I walked around the neighborhood. New York moves at a super fast pace and has an unreal amount of things to do. I quickly realized that although I was in a college dormitory I was actually in the city. New York City is NYU’s campus.”

Even meeting his roommate was a new experience. “My roommate is Chinese, from China Chinese. He said his name. It was really a very long name that I had no clue how to pronounce…but he said he was telling people to call him Eric. It was kind of tough understanding him speak for the first few days, but I caught on eventually. Although we are from opposite sides of the world we really have a lot in common, especially love of sneakers and pizza.”

Living on the 22nd floor of a high-rise building was a huge change for someone used to living in a typical suburban house. One thing he didn’t have to get used to was the access to some of the best pizza shops on the planet. Just a block from his dorm is what Graf described as the best pizza place in New York City: Joe’s Pizza on 14th street.

Even Barstool’s OneBite program agrees, rating it one of the best in NYC.

“What was really interesting that there are so many people in NYC,” explained Graf. “It’s kind of like a culture shock…you see someone, and you probably will never see then again.”

College was not all about great food, Graf has maintained a very tough schedule of classes, hours of homework, traveling to races on weekends as well as living a normal life of a freshman.

Through the help of his counselor at NYU, he has classes Monday through Wednesday and then is off to race his Chad Bryant Racing Ford in the ARCA Menards Series and then back at it the next Monday.

Graf is majoring in Business, Media and Sports Management an area that he believes will be quite useful in not only his career but also after he has hung up his racing helmet for the last time.

“I really like my classes,” added Graf. I had a few classes that stood out…two economic classes, a sports management class and introduction to writing. What was really cool was that my writing professor, Professor Rzonka was from the Detroit area and grew up near a Ford plant and he liked racing and he watched a few of my races.

Dr. Brandon Brown, my sports management professor was into other sports, but I got him interested in my career as well…I guess I introduced my sport to two new race fans.”

Graf earned straight A’s in the fall semester which is quite the feat considering his hectic schedule.

So what was the toughest part of his transition to full-time student and being a professional race car driver?

“Time management was something that had not been a priority in my life until college,” grinned Graf. “It wasn’t easy scheduling everything every day, but it was an area that I worked hard on knowing that it would be a key to me handling life and being successful.”

After the last race of 2018, his total focus was on school and final exams. But now that the 2019 racing season has started he is back to his hectic workload. Graf has even landed an internship for the spring semester.

The first race of the season didn’t go as planned as a plastic grocery bag got caught on the air intake port on the front of his car and overheated the engine.

“That was really disappointing,” recalled Graf. “What are the odds of a plastic shopping bag being on the track at Daytona International Speedway. It was nuts.”

Now, he is now eager to get behind the wheel of his No. 77 EAT SLEEP RACE Ford in Pensacola, Fla. on March 9.

“Although we experienced a few mechanical gremlins at Daytona we still believe that when the last checkered flag falls in Kansas we will be right there contending for the championship,” sounded Graf. “We recently tested our short track program and our confidence is at a very high level.”

Racing at nearly 200 miles per hour is a long way from kayaking with your college friends on the Hudson River…but for Joe Graf Jr. it’s just another day at the office.

It’s been quite the journey from the suburbs to the dynamic Greenwich Village in New York City. Now he hopes his journey will include more ARCA Menards Series wins – and maybe even a championship. “Imagine if I win the Championship.. I still need to be in school on Monday morning. But hey, I will be 21 by then and can celebrate with some cold beers in some of these iconic NYC bars.”