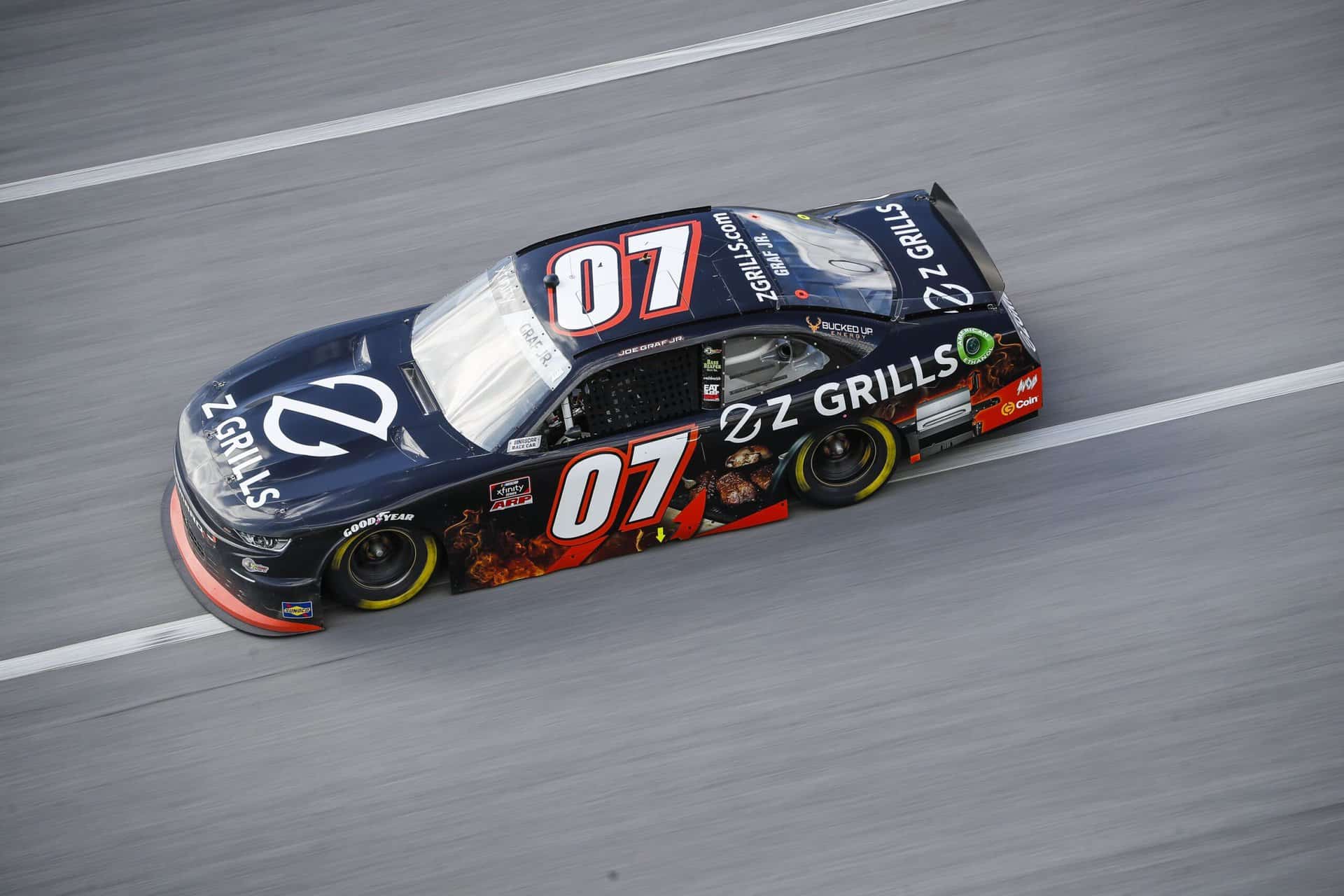 Welcome Back: This weekend at Atlanta (Ga.) Motor Speedway, SS GreenLight Racing and Joe Graf Jr. welcome back Z Grills as the primary partner of the team’s No. 07 Chevrolet Camaro for Saturday afternoon’s Credit Karma Money 250.

Atlanta marks the fourth of a multi-race deal where Z Grills, one of the most respected names in pellet grills will be the primary partner.

About Z Grills: As an industry-leading manufacturer for more than 30 years, Z Grills manufactured grills, kitchen equipment and outdoor products for several top brands in the industry.

Now, Z Grills has grown into one of the most respected brands in the pellet grill industry.

Saving You Some Money: As summer kicks off, Joe Graf Jr.’s other marketing partner Z Grills wants to help the NASCAR community save money – but also enjoy the perfect barbecue.

In preparation of their upcoming partner at Atlanta (Ga.) Motor Speedway this weekend, Z Grills Racing (ZGrillsRacing.com) is offering a 10 percent discount off your TOTAL purchase, using the code NASCAR at checkout.

VIP Exclusive: Thanks to partner G-Coin, a product that brings gold into the digital age – race fans have an opportunity to win a VIP passes for a NASCAR Xfinity Series race of their choice.

To enter, follow @JoeGrafJr and @The_GCoin on Twitter, tag two friends and simply download the G Coin app to your mobile device. A winner will be chosen at the end of the month.

Welding Another Partnership: Recently, SS GreenLight Racing and Joe Graf Jr. announced that PowerWeld will serve as the primary marketing partner of the No. 07 Chevrolet Camaro for the upcoming New Holland 250 at Michigan International Speedway in August.

PowerWeld products are available at quality distributors and retailers in the United States and Canada.

Earlier this year, Graf started 24th in his No. 07 HAZHEART.com Chevrolet Camaro but battled handling issues that relegated the team to a 29th place result.

In his track debut last June, he finished 26th.

Joe Graf Jr. Xfinity Series Career Intermediate Nuggets: At tracks greater than 1.0-mile in size, Graf has competed in 26 NASCAR Xfinity Series races. He holds an average starting position of 25.0 and an average result of 24.2

In addition to Wise, Graf has also been working with former NASCAR driver and open wheel driver Scott Speed on being more discipline behind the wheel of his No. 07 G-Coin Chevrolet Camaro.

Sneaker Mania: Along with the adrenaline of the Motorsports competition, Joe Graf Jr. also has a vogue for hype sneakers. In his current collection, he owns and wears at least 80 limited edition sneakers – and his collection continues to grow every month.

He will crew chief his 50th NASCAR Xfinity Series race as crew chief on Saturday afternoon and his third race at Atlanta.

In his previous 49 NASCAR Xfinity Series starts, he has collected four top-five and 14 top-10 finishes.

Hello From The Other Side: Graf Jr. has a teammate at SS GreenLight Racing. Rookie Carson Ware will drive the No. 17 JACOB Construction Chevrolet Camaro on Saturday afternoon.

Ware is poised to make his fifth career Xfinity Series start and second of the 2021 season but first at Atlanta Motor Speedway.

On Atlanta Motor Speedway: “Atlanta is a very unique race track, especially since the pavement is the oldest of any track that we race on throughout the year. It is going to be hot this weekend in Atlanta, which means the track will be slick, hopefully we can use that to our advantage.

“I’m glad to have Z Grills back on the car this weekend and hopefully we can give them their best finish of the season on Saturday afternoon.”

On New Leadership: “I have a positive outlook on the second half of the season even though the results were not what we were hoping for to start the year.

“I will continue to work hard and give everything both on and off the track to enhance the overall presence and performance of our team and partners for the rest of the 2021 season.”

On Recent Performances: “Most of the first half of the season has been tough, however, it is during times like this that all your mental discipline and training really come to the forefront.

“I can’t stress enough the importance of mental toughness in overcoming obstacles you don’t control.

“When I look at the speed and balance of our cars this year, they are much better than last year. That isn’t from luck. That is from the hard work and grind it out mental toughness of this team.

“It’s such a shame that we have had such a rough stretch, but this is no different than life.  We all experience highs and lows in life.  Like anyone at a low point, we are going to remain mentally tough and keep moving forward. We embrace the suck. We know it can’t last.

“Going forward we are going to focus on what we can control and continue to execute at our highest level during the second half of the year. There are a ton of races left in the season and hopefully, we have shaken the bad luck.  I would be worried if our cars lacked competitiveness, but they don’t. We have a lot of racing left and we are due for some good luck.”