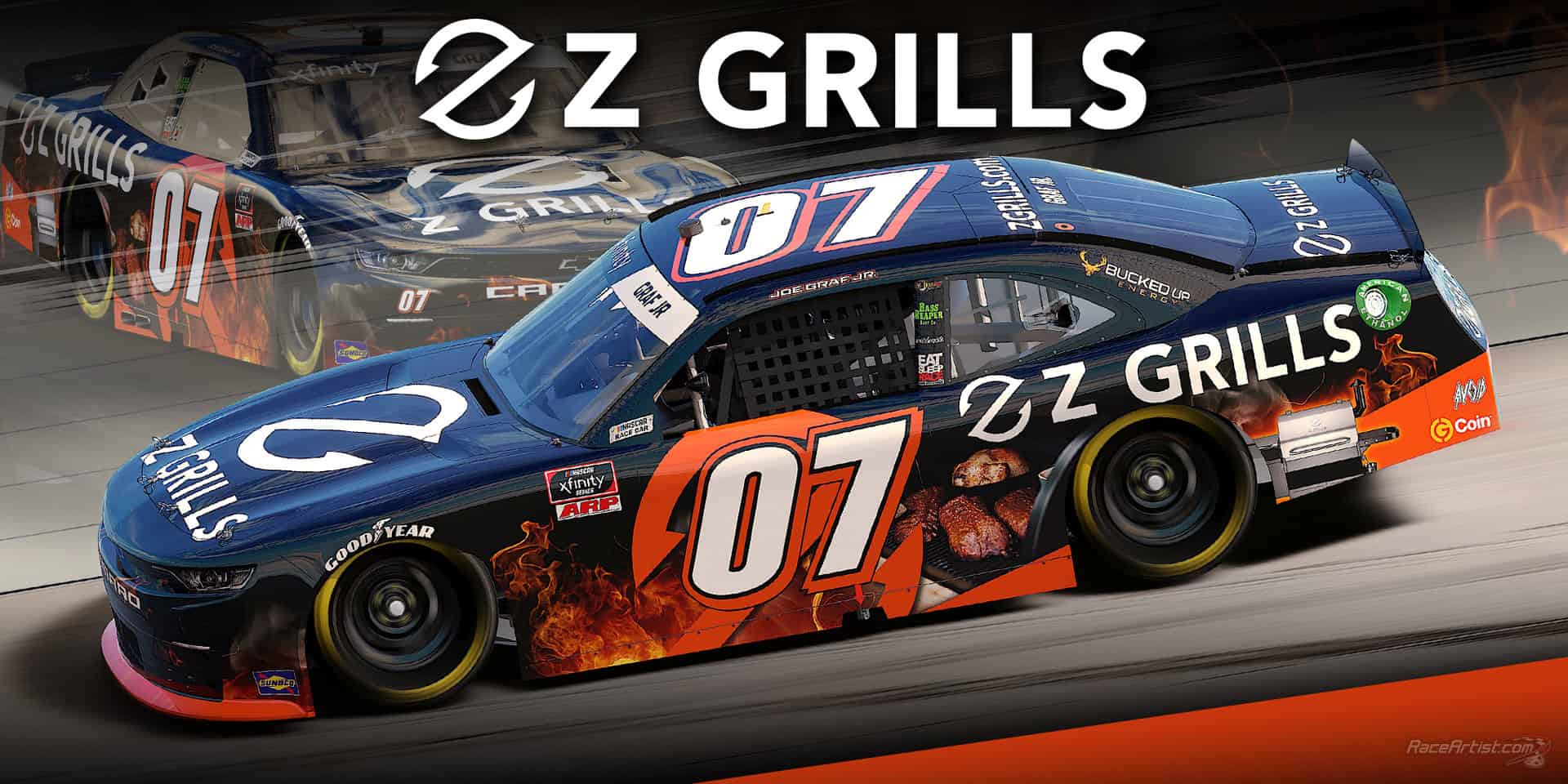 It’s Your Turn: This weekend at Phoenix (Ariz.) Raceway, SS GreenLight Racing and Joe Graf Jr. welcome Z Grills as the primary partner of the team’s No. 07 Chevrolet Camaro for Saturday afternoon’s Call 811 Before You Dig 200.

Phoenix marks the first of a multi-race deal where Z Grills, one of the most respected names in pellet grills will be the primary partner.

About Z Grills: As an industry leading manufacture for more than 30 years, Z Grills manufactured grills, kitchen equipment and outdoor products for several top brands in the industry.

Now, Z Grills has grew into one of the most respected brands in the pellet grill industry.

Saving You Some Money: To celebrate the partnership, Z Grills Racing (ZGrillsRacing.com) is offering a 10 percent discount on every item online, using the code JoeGraf07 at checkout.

Year of the Underdogs: Heading to Homestead-Miami Speedway two weeks ago, Buffalo Bills running back Antonio Williams and a personal investor in Joe Graf Jr.’s racing career launched a video on Twitter offering an exclusive glimpse into his personal life and his reason for wanting to be a part of NASCAR – exclusively with Graf Jr.

Since its release on Feb. 25, 2021, the video has gone viral with over 125,000 views and feedback from some of the sports’ icons including retired NASCAR Cup Series driver Dale Earnhardt Jr., seven-time Cup Series champion Jimmie Johnson and current 23XI Racing driver Darrell Wallace Jr.

Having to qualify his No. 08 Chevrolet Camaro on-time last March, Graf Jr. impressed with a 19th-place qualifying effort but was collected in a late-race accident.

In the season finale last November, Graf Jr. contented for a top-20 finish until gremlins late in the race resulted in a 27th place result.

Joe Graf Jr. Xfinity Series Career Intermediate Nuggets: At tracks greater than 1.0-mile in size, Graf has competed in 20 NASCAR Xfinity Series races. He holds an average starting position of 23.9 and an average result of 22.1.

Las Vegas Motor Speedway Race Recap: In last weekend’s Alsco Uniforms 300 at Las Vegas (Nev.) Motor Speedway, Graf was able to overcome a loose No. 07 Bucked Up Chevrolet to bolt towards the top-20 in Stage 3 and quickly maneuvered himself inside the top-20 in the closing laps, claiming 18th at the checkered flag.

The result was the team’s third top-20 finish of 2021 and moved Graf Jr. up one position in the Xfinity Series standings to 14th.

Last year after four races, he sat a distant 29th in the championship standings.

In addition to Wise, Graf has also been working with former NASCAR driver and open-wheel driver Scott Speed on being more discipline behind the wheel of his No. 07 Bucked Up Energy Chevrolet Camaro.

He will crew chief his fifth NASCAR Xfinity Series race as crew chief on Saturday afternoon.

Hello From The Other Side: Graf Jr. has a teammate at SS GreenLight Racing. Veteran JJ Yeley will drive the No. 17 Ford Mustang on Saturday afternoon.

Yeley is set to make his 337th career NASCAR Xfinity Series start and 21st at the 1.0-mile speedway. At his hometown race track, Yeley has earned three top-10 finishes, including a track best of sixth in 2006 driving for Joe Gibbs Racing.

On Phoenix Raceway: “I’m looking for redemption this weekend at Phoenix Raceway. I particularly like the race track, but do not have the results to show for it.

“We had a fast car last November but unfortunately cut down a tire and didn’t get the finish we deserved. Hopefully, we can continue our momentum of a solid start to the 2021 season and deliver Z Grills a hot finish in their debut.”

On First Races Of 2021 Season: “The mentality around the team is good and we’re continuing to learn. We had a strong recovery from Homestead with a top-20 at Las Vegas and the race last weekend proved that we were able to overcome adversity early in the race and contend for a solid finish when it counted most.

“We’re heading in the right direction and we hope we can end the west coast swing on another positive.”

On New Z Grills Partnership: “I am thrilled to welcome Z Grills to NASCAR and to our SS GreenLight Racing team. Grilling at race tracks has always been a staple of the environment whether you are up close and personal with the race team or race fans bonding in the infield talking about their race track experience.