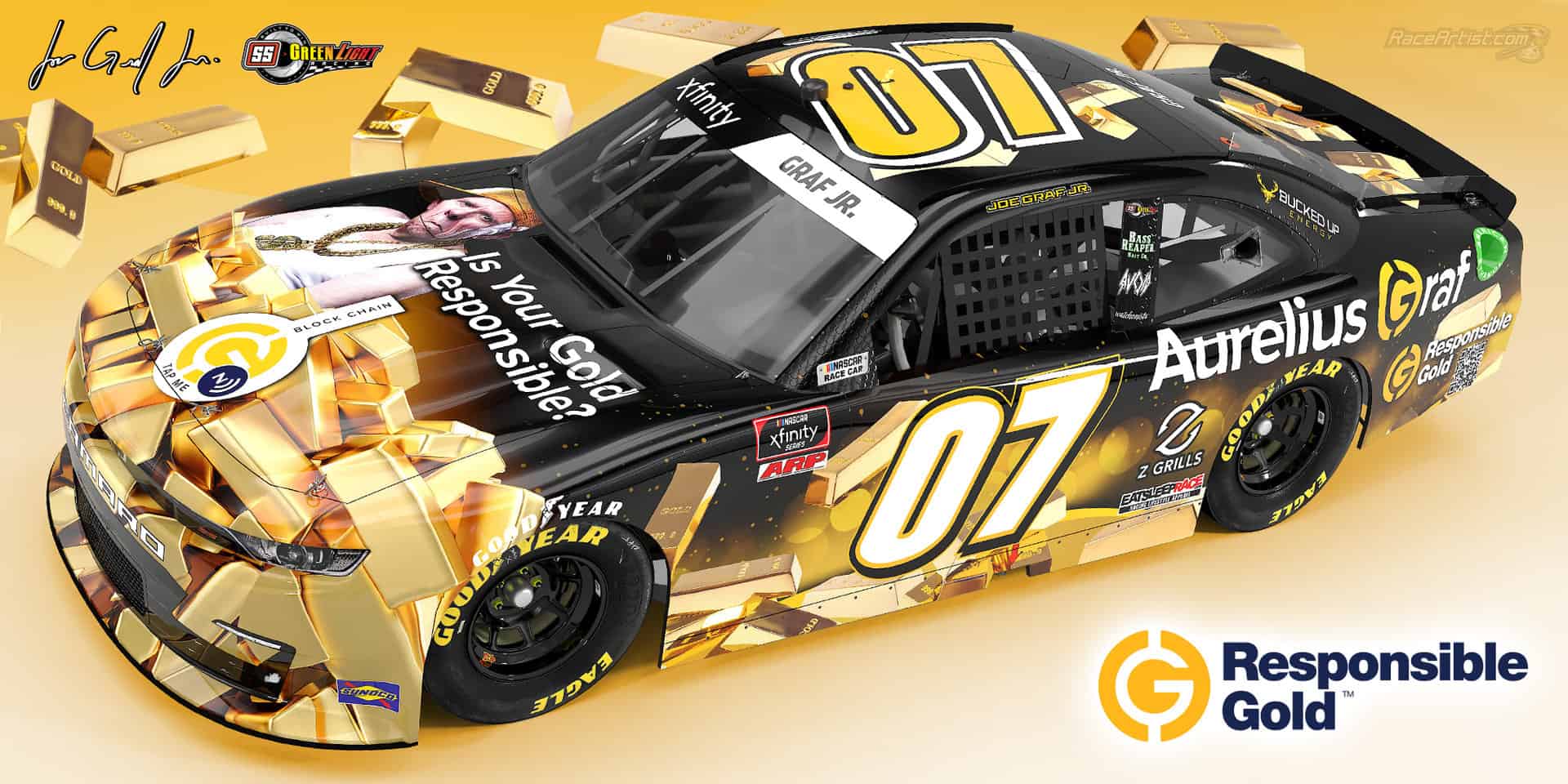 Cook Out 250 Starting Position: 28th (Based on event formula)

The Cook Out 250 will mark the first time SS GreenLight Racing will utilize chassis No. 711 in 2021.

Welcome Aboard: This weekend at Martinsville (Va.) Speedway, SS GreenLight Racing and Joe Graf Jr. welcome new partner Responsible Gold as the primary partner of the team’s No. 07 Chevrolet Camaro at the historic 0.526-mile short track.

The Cook Out 250 will be Responsible Gold’s first foray into NASCAR and specifically the Xfinity Series.

About Responsible Gold: The purpose of Responsible Gold is to use the power of technology to solve pressing global challenges. Their mission is to make gold sustainable and globally accessible.

The Responsible Gold standards have been developed to document best practices in responsible production and sourcing. They serve as a tool to support participants in enhancing their environmental, social and governance practices and contribute to the United Nations Sustainable Development Goals.

Responsible Gold is the only scalable solution for fully traceable ethical gold.

Saving You Some Money: A new partner to Joe Graf Jr. and still excited about their debut in the NASCAR Xfinity Series last month at Phoenix (Ariz.) Raceway, Z Grills is still celebrating their partnership with Graf and the team.

To celebrate the partnership, Z Grills Racing (ZGrillsRacing.com) is offering a 10 percent discount off your total purchase, using the code JoeGraf07 at checkout.

Year of the Underdogs: NFL’s Buffalo Bills running back Antonio Williams and a personal investor in Joe Graf Jr.’s racing career recently launched a video on Twitter offering an exclusive glimpse into his personal life and his reason for wanting to be a part of NASCAR – exclusively with Graf Jr.

Since its release on Feb. 25, 2021, the video has gone viral with over 136,000 views and feedback from some of the sports’ icons including retired NASCAR Cup Series driver Dale Earnhardt Jr., seven-time Cup Series champion Jimmie Johnson and current 23XI Racing driver Darrell Wallace Jr.

Last October, he finished a solid 21st after starting 25th and completed all 250 laps in last season’s Top Draft 250 aboard the No. 08 EAT SLEEP RACE Chevrolet.

He holds an average starting position of 23.7 and an average result of 20.0 and has been running at the conclusion of all seven events.

Atlanta Motor Speedway Race Recap: In the series’ most recent race at Atlanta (Ga.) Motor Speedway, Graf battled the handling in his No. 07 HAZHEART.com Chevrolet but fought through the adversity to claim 29th at the checkered flag.

Exiting Atlanta, Graf still sat comfortably in the top-20 in the point standings in 18th.

Last year after six races, he sat 23rd in the championship standings.

In addition to Wise, Graf has also been working with former NASCAR driver and open-wheel driver Scott Speed on being more discipline behind the wheel of his No. 07 Responsible Gold | Bucked Up Energy Chevrolet Camaro.

He will crew chief his seventh NASCAR Xfinity Series race as crew chief on Friday night.

Hello From The Other Side: Graf Jr. has a teammate at SS GreenLight Racing. Veteran JJ Yeley will drive the No. 17 ALCOVA Mortgage Chevrolet on Friday night.

Yeley is set to make his 338th career NASCAR Xfinity Series start and second at the historic paperclip. His best Xfinity track finish occurred in the 2006 Goody’s 250 edition where he finished ninth after starting 10th driving for Joe Gibbs Racing.

“The last couple of races haven’t gone as we had hoped, so Martinsville is a good place to come and try to redeem ourselves following the first break of the 2021 season.”

On Responsible Gold Partnership: “We have a unique partnership this weekend that will lead into even better things to come soon. I think our car will certainly catch some attention and hopefully, we’ll also have a good finish too.”

On First Races Of 2021 Season: “The mentality around the team is pretty good and we’re continuing to learn. Atlanta was a disappointment, but we’re not letting our guard down. We are determined to fight hard and bounce back.

“We just need to keep making as little mistakes as possible and hope that everyone’s hard work will pay off with the finishing result on the race track.”