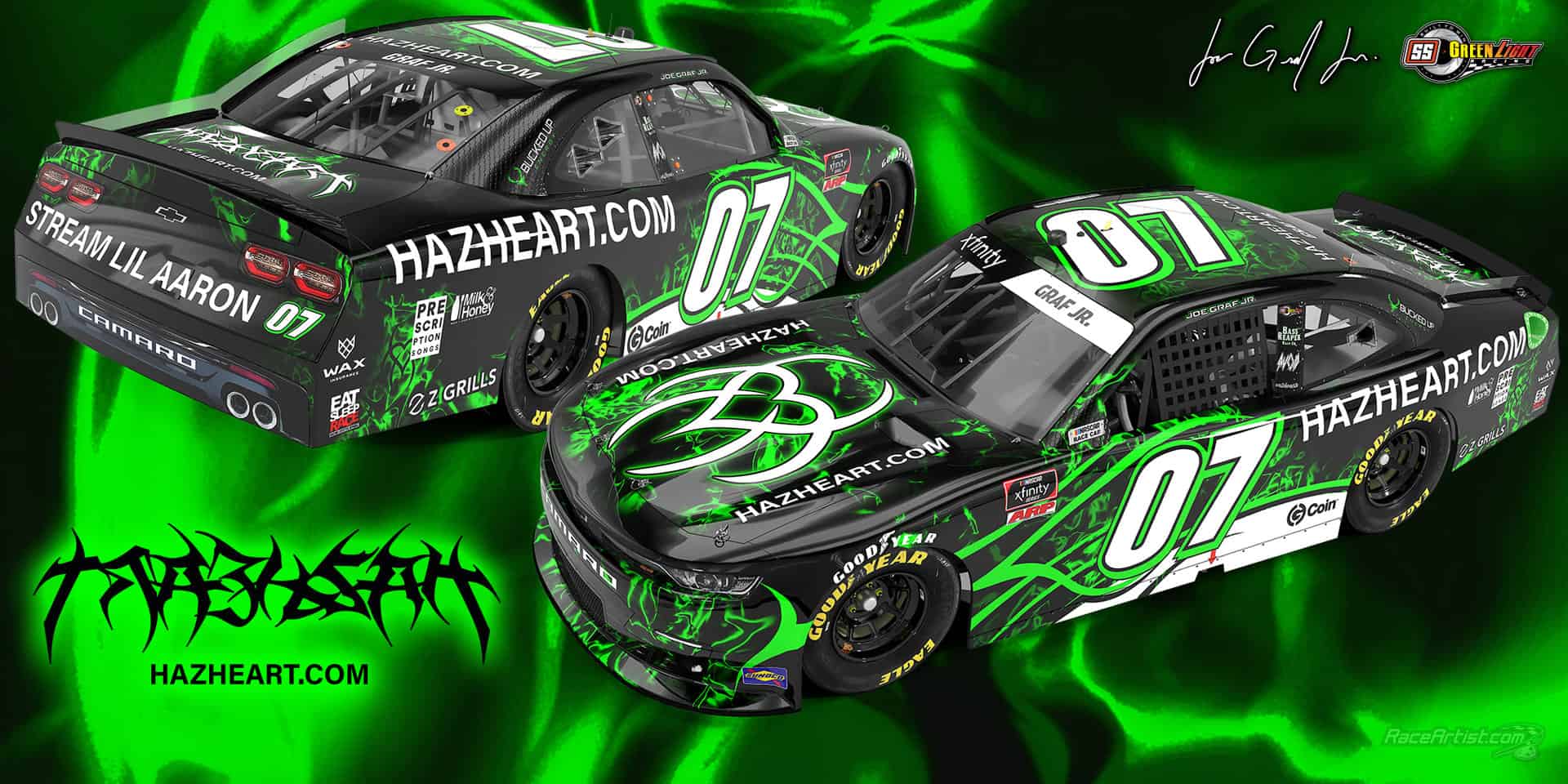 Welcome Aboard: This weekend at Atlanta (Ga.) Motor Speedway, SS GreenLight Racing and Joe Graf Jr. welcome GRAMMY award-winning songwriter, rapper and singer Lil Aaron and his HAZHEART brand as the primary partner of the team’s No. 07 Chevrolet Camaro this weekend at AMS.

About HAZHEART: HAZHEART is the cultural embodiment of all things Lil Aaron and an expansion past just one artist into a lifestyle ideal style.

From the music side via record label(s) and music publishing to the physical trends and brands in clothing, collectibles, art and more.

HAZHEART is a stamp of approval on the things and people it associates with in the world built over the better part of the past seven years.

HAZHEART music represents artists including Ethel Cain, smrtdeath, Belis and more. The brand influence can be seen represented in the HAZHEART merchandise, music videos and artwork as well as the everyday lifestyle of those who claim it.

Saving You Some Money: A week after making their NASCAR Xfinity Series debut as the primary sponsor of Joe Graf Jr., at Phoenix (Ariz.) Raceway, Z Grills is still celebrating their partnership with Graf and the team. To celebrate the partnership, Z Grills Racing (ZGrillsRacing.com) is offering a 10 percent discount on every item online, using the code JoeGraf07 at checkout.

Year of the Underdogs: Heading to Homestead-Miami Speedway three weeks ago, Buffalo Bills running back Antonio Williams and a personal investor in Joe Graf Jr.’s racing career launched a video on Twitter offering an exclusive glimpse into his personal life and his reason for wanting to be a part of NASCAR – exclusively with Graf Jr.

Since its release on Feb. 25, 2021, the video has gone viral with over 125,000 views and feedback from some of the sports’ icons including retired NASCAR Cup Series driver Dale Earnhardt Jr., seven-time Cup Series champion Jimmie Johnson and current 23XI Racing driver Darrell Wallace Jr.

Last June, he finished 26th after starting 27th and completing all but one lap in last season’s EchoPark 250 aboard the No. 08 Core Development Group Chevrolet.

Joe Graf Jr. Xfinity Series Career Intermediate Nuggets: At tracks greater than 1.0-mile in size, Graf has competed in 21 NASCAR Xfinity Series races. He holds an average starting position of 23.5 and an average result of 22.3.

Phoenix Raceway Race Recap: In last weekend’s Call 811 Before You Dig 200, Graf contended for a top-20 finish in his No. 07 Z Grills Chevrolet Camaro but a chaotic green-white-checkered restart to end the race shuffled him outside the top-20 and to a 25th place result.

Leaving Phoenix, Graf still sits comfortably in the top-20 in the point standings in 17th.

Last year after five races, he sat 26th in the championship standings.

In addition to Wise, Graf has also been working with former NASCAR driver and open wheel driver Scott Speed on being more discipline behind the wheel of his No. 07 HAZHEART | Bucked Up Energy Chevrolet Camaro.

He will crew chief his sixth NASCAR Xfinity Series race as crew chief on Saturday afternoon.

Hello From The Other Side: Graf Jr. has a teammate at SS GreenLight Racing. Veteran Cody Ware will drive the No. 17 Chevrolet on Saturday afternoon.

On Atlanta Motor Speedway: “I’m optimistic about Atlanta this weekend. We weren’t bad last year, it just was a very challenging and demanding race track to learn without practice or qualifying.

“I am hoping that my experience last year will be a benefit to us on Saturday and we can have another strong finish this season.”

On Lil Aaron’s HAZHEART Partnership: “What a great opportunity for myself and SS GreenLight Racing to have the support of Lil Aaron and HAZHEART this weekend at Atlanta.

“Our team has been extremely focused on bringing not only new partners but other public figures to the NASCAR Xfinity Series in 2021 and our relationship with Lil Aaron is just another example of the great strides we are making. I’m looking forward to this weekend and a strong finish in our HAZHEART colors.”

On First Races Of 2021 Season: “The mentality around the team is good and we’re continuing to learn. Last weekend, we were much better at the end of the race than our result showed, so we are poised for a rebound on Saturday.

“We just need to keep making as little mistakes as possible and hope that everyone’s hard work will pay off with the finishing result on the race track.”