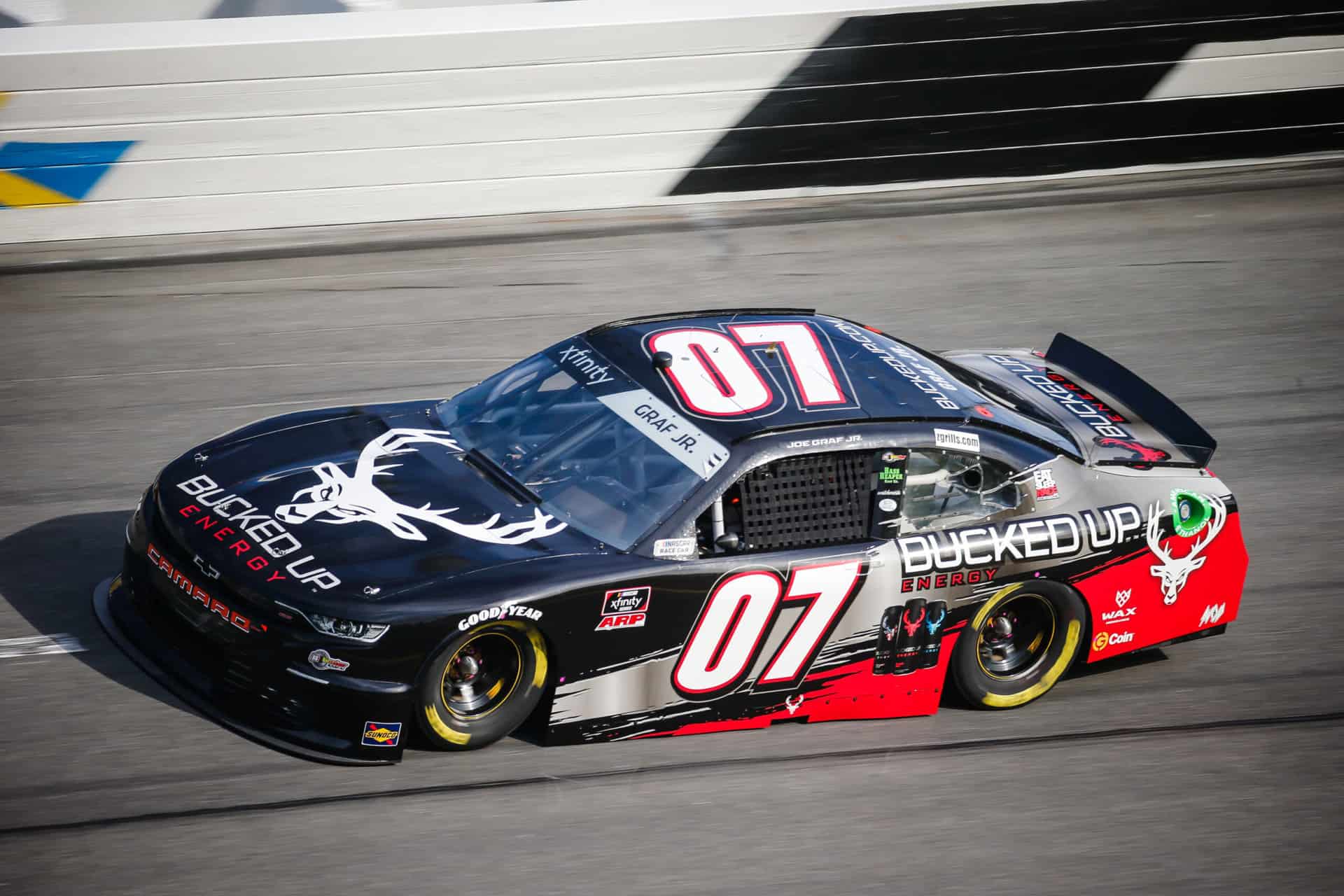 To kick off his second season of competition at SS GreenLight Racing, Joe Graf Jr. will drive the No. 07 Bucked Up Energy Chevrolet Camaro with a new sophisticated updated livery.

Full of Energy: Bucked Up Energy and its sister products will continue its role as the primary partner of Graf’s No. 07 Chevrolet Camaro to kick off the 2021 Xfinity Series season. The Daytona International Speedway Road Course is the second race of 2021 but is the 24th race overall in a multi-year, multi-race deal with the former ARCA Menards Series winner.

Welcome To The Team: On February 10, 2021, Joe Graf Jr. officially announced Buffalo Bills running back Antonio Williams as an investor in his racing program this season.

Williams, 23, will be heavily involved in Graf’s day-to-day business interactions, while also playing a key role as a supporter of his racing endeavors by attending races, including this weekend’s race at the Daytona Road Course.

Together, the two are focused on Graf reaching the pinnacle of the sport, the NASCAR Cup Series in the near future.

The Challenge Is On!: Earlier this week, Antonio Williams threw a challenge at JD Motorsports driver Ryan Vargas and NFL Saints running back Alvin Kamara who is backing Vargas’s race with his The Big Squeezy brand.

If Joe Graf Jr. finishes higher than Vargas’s No. 6 Chevrolet Camaro in Saturday afternoon’s race, Vargas and Kamara will have to make a donation to Graf’s charity of choice, myFace, a leading nonprofit focused on providing the comprehensive care, education and information to help people with craniofacial differences lead full and productive lives.

If Ryan Vargas finishes higher than Graf’s No. 07 Bucked Up Energy Chevrolet Camaro, Williams and Graf will pledge a donation to Vargas’ charity of choice, Son of a Saint, a nonprofit founded in 2011 by Sonny Lee, son of the late New Orleans Saints DB Bivian Lee whose mission is to transform the lives of fatherless boys.

Race fans can also pledge their support to myFace by clicking here.

Last August, the rookie started 25th but finished 26th, completing 51 of the 52 scheduled laps of the race.

Back To Turning Lefts and Rights Again: For just the fifth time in his NASCAR Xfinity Series career, Joe Graf Jr. will compete on a road course. Graf, 22, earned a career-best finish of 15th in his most recent Road Course event at the Charlotte (N.C.) Motor Speedway ROVAL last October in the rain.

He holds an average starting position of 27.8 (per rule book) and an average result of 23.0 with 99 percent of the laps complete.

Daytona International Speedway Race Recap: In the season-opening Beef. It’s What’s For Dinner 300 at Daytona, Graf Jr. capitalized on a strong starting position after Mother Nature washed out qualifying Saturday morning to keep his No. 07 Bucked Up Energy Chevrolet tucked up in the lead draft throughout the races’ 120 circuits.

On a late-race restart, Graf Jr. was able to avoid carnage and draft his SS GreenLight Racing Chevrolet to an 11th place finish, a career-best for Graf in 37 career starts.

He will crew chief his second NASCAR Xfinity Series race as crew chief on Saturday afternoon.

On Daytona International Speedway Road Course: “I’m ready for the challenge of another road course in the NASCAR Xfinity Series. I know it rained hard, but my last road course race at the Charlotte ROVAL last fall, I had a blast.

“We stayed out of trouble and had a good finish. We’ll need to do more of the same on Saturday. Our team has some momentum right now and I sure would like to keep it on our side heading to Homestead-Miami Speedway.”

On Daytona International Speedway Finish: “There are so many reasons to be thankful for how Daytona went last week. I can’t thank my SS GreenLight Racing team enough for their hard work.

“As a team, we had a good day that was rewarded with a strong finish and a positive vibe to start the 2021 NASCAR Xfinity Series season. I hope it continues.”

On The Challenge: “I’m proud of the initiatives that Antonio is taking control of since we announced our partnership last week at Daytona. He is really doing some good stuff not only for me personally but for NASCAR as a whole.

“With fellow running back Alvin Kamara joining NASCAR with Ryan (Vargas), what a cool way to collide the two worlds for the sake of competition and giving back.

“The challenge is on and I hope we win.”