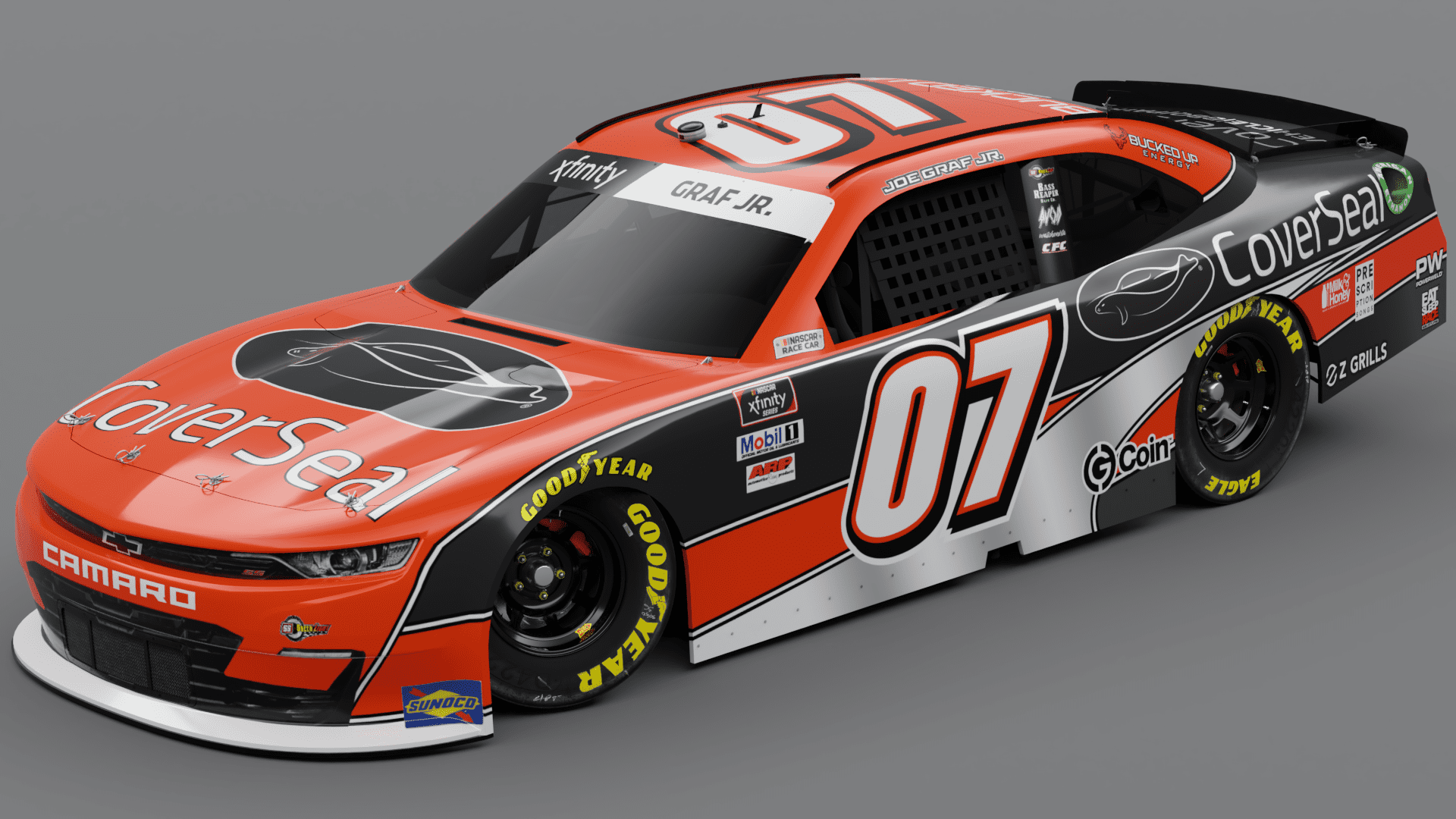 Welcome Back: This weekend at Martinsville Raceway, Joe Graf Jr. and the No. 07 SS GreenLight Racing Chevrolet Camaro will highlight CoverSeal as the primary partner in the penultimate race of the 2021 NASCAR Xfinity Series season.

CoverSeal® —the standout cover option keeping vehicles and other outdoor investments safe from rodents and the weather has served as associate marketing partner at Daytona (Fla.) International Speedway in August, Richmond (Va.) Raceway in September and last weekend at Kansas Speedway.

This weekend, however, CoverSeal® will increase their commitment and serve as the primary marketing partner in their first ever primary partnership in auto racing.

We Have You COVERED: Racing fans know the importance of keeping cars in top-quality condition, and they can extend an unmatched level of care toward their own vehicles with CoverSeal®.

These covers don’t just protect vehicles from nature’s damage: whether fans plan to tailgate at the track or barbecue in the backyard, CoverSeal® craftsmanship can protect grills and furniture when not in use.

The CoverSeal® weighted apron helps seal the cover to the ground on each version, making the cover easy to use and hard to beat.

The car decked out in spooktacular colors is also filled with some personal information from Joe Graf Jr. surrounding All Hallows’ Eve.

Halloween first came to the United States in the 1840s but the observance of Halloween dates back to the ancient Celtic festival of Samhain.

The custom of Halloween came to America in the 1840s with Irish immigrants fleeing a potato famine. At that time, the favorite pranks in New England included tipping over outhouses and unhinging fence gates.

Another New Sponsor Announcement: Before the curtain is drawn on the 2021 NASCAR Xfinity Series season, SS GreenLight Racing and Joe Graf Jr. will announce again another innovative marketing partner for the final race of the year at Phoenix (Ariz.) Raceway next month.

The new sponsor is also new to NASCAR and the Xfinity Series scene and is scheduled to be announced on Monday, Nov. 1, 2021.

Save The Date: The offseason may be approaching, but that doesn’t mean Joe Graf Jr. won’t be around. This week, he confirmed his attendance for this year’s 32nd annual Stocks-For-Tots.

Returning after a one-year sabbatical due to COVID-19, this year’s event is set for Tuesday, December 7, 2021, in Mooresville, N.C.

Additional details on the engagement will be available through Graf’s social media or Stocks-For-Tots, official Facebook page.

Since 1989, Stocks for Tots has generated more than $1 million and collected well in excess of 70,000 toys during its never-ending efforts to raise awareness of child abuse throughout North Carolina.

In Loving Memory: This weekend at Kansas Speedway and for the remainder of the 2021 NASCAR Xfinity Series season, Joe Graf Jr. and SS GreenLight Racing will carry the name of Bray Pemberton on the passenger side name rail of the team’s No. 07 Chevrolet Camaro.

In his two previous races, Graf Jr. finished 21st and 38th respectively. In his most recent trip to the historic Virginia race track, Graf Jr. contended for a top-20 finish but was wiped out of the race from another competitor 71 laps from the finish.

Joe Graf Jr. Xfinity Series Career Short Track Nuggets: At tracks classified as a short track, Graf has competed in 10 NASCAR Xfinity Series races. He holds an average starting position of 25.3 and an average result of 22.6.

After starting 30th, Graf muscled his No. 07 EAT SLEEP RACE Chevrolet Camaro inside the top-20, until a series of flat tires flattened the team’s solid effort, resulting in a 29th place finish.

Put Me In Coach: To strengthen his physique, Joe Graf Jr. began collaborating with new trainer and former NASCAR Cup Series Josh Wise during the 2020 offseason.

In addition to Wise, Graf has also been working with former NASCAR driver and open-wheel driver Scott Speed on being more disciplined behind the wheel of his No. 07 CoverSeal Chevrolet Camaro.

He will crew chief his 64th NASCAR Xfinity Series race as crew chief on Saturday night and his third at the 0.526-mile oval.

In his previous 63 NASCAR Xfinity Series starts, he has collected four top-five and 15 top-10 finishes.

Hello From The Other Side: Graf Jr. has a teammate at SS GreenLight Racing. Veteran JJ Yeley will drive the No. 17 Chevrolet Camaro on Saturday night for his 15th start of the 2021 season.

Yeley is set to make his 350th career NASCAR Xfinity Series start and fourth at Martinsville. His best Xfinity track finish occurred in the 2006 Goody’s 250, where he finished ninth after starting 10th for Joe Gibbs Racing.

On Martinsville Speedway: “Redemption is on my mind this weekend at Martinsville. I am stoked about having CoverSeal onboard our No. 07 Chevrolet Camaro for the next to last race of the year.

“Martinsville is a tough short track, but I embrace the challenge and I would like nothing more than leaving Martinsville on Saturday night with a performance similar to what we had in our most recent short track at Bristol Motor Speedway last month.

“We’ve had a lot of speed in our cars the last few weeks and we’ve been able to capitalize on that when we didn’t have bad luck on our side. I hope we can leave Martinsville with some momentum on our side for the finale at Phoenix.”

On Xfinity Series Homestretch Run: “Hard to believe there is just two races left in the 2021 NASCAR Xfinity Series season. Just two more weekends. Our season has not gone the way we planned, but it has not been from a lack of effort, just a variety of circumstances – most beyond our control.

“I really look forward to Martinsville and Phoenix though. We see those races as opportunities. Not only an opportunity to deliver strong finishes but build some momentum for the offseason. We are also starting to get focused on 2022 and cannot wait to announce those plans soon.”