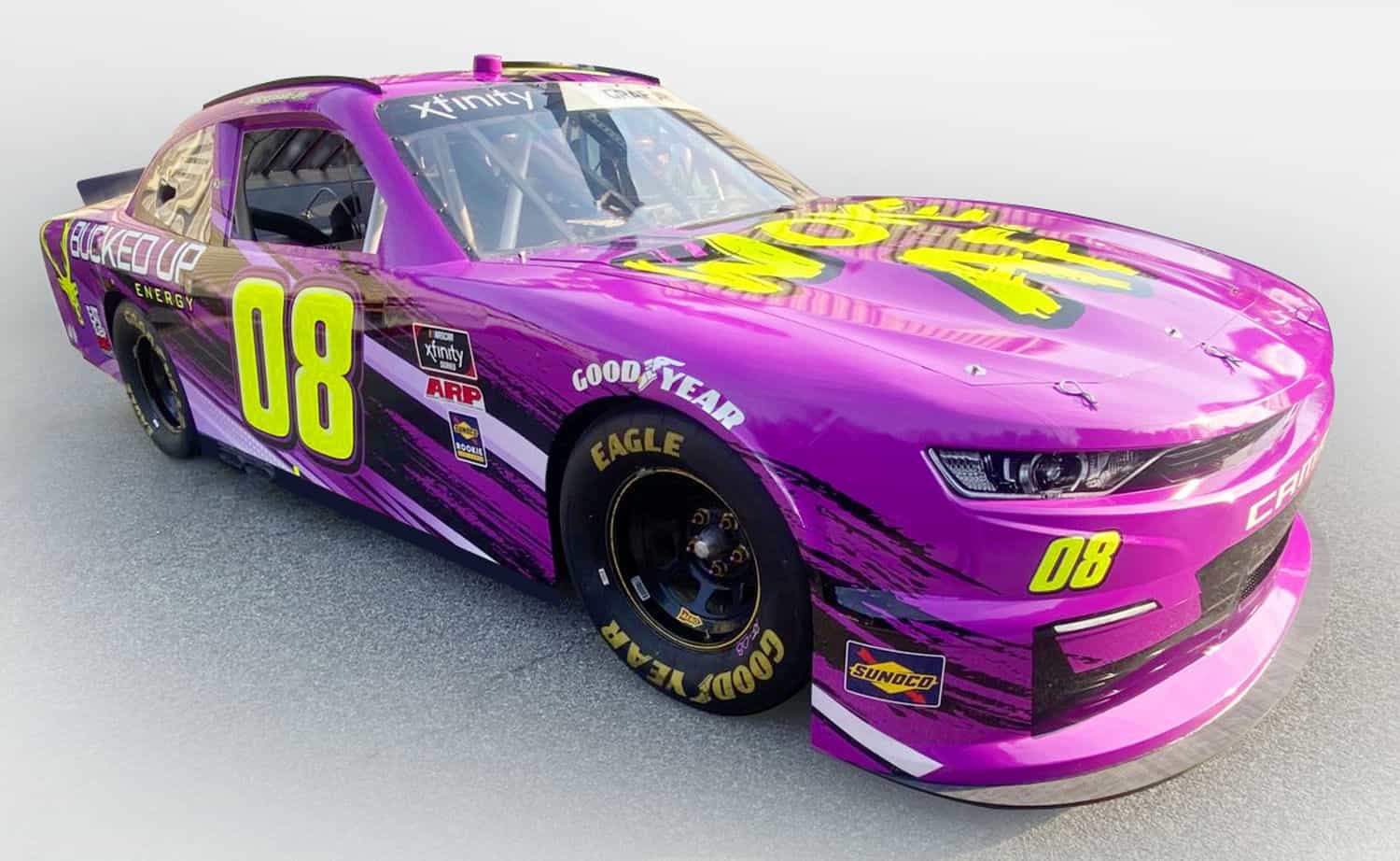 Chassis No. 702 also ran at Daytona (Fla.) International Speedway in February 2020 with a 36th-place finish after qualifying fifth.

Chassis No. 702 is known for its performance at Talladega Superspeedway in April 2019 with a second-place outing after an eighth-place starting position.

Full of Energy: Bucked Up Energy and its sister products will continue its role as the primary partner of Graf’s No. 08 Chevrolet Camaro. Dover International Speedway is the 14th race in a multi-year, multi-race deal with the former ARCA Menards Series winner.

Last July, Graf Jr. made his Xfinity Series debut at Daytona driving for Richard Childress Racing, qualifying a then career-best sixth. He was collected in a late-race crash and finished 23rd.

Graf Jr. made his SS GreenLight Racing debut at the 2.5-mile superspeedway in February qualifying a career-best fifth but was swept into a mid-race accident, finishing 36th.

He holds a career-best 5.5 average starting position at Daytona.

The WOKE AF high-stim pre-work supplement will take the role as the primary marketing partner for the penultimate superspeedway race of the season.

The traditional supplements Bucked Up and the world’s first and only true nootropic pre-work workout supplement BAMF will hold associate placements on Graf Jr.’s No. 08 Chevrolet Camaro.

Each supplement provides different elements, as well as different objectives offering each consumer a real reason to get Bucked Up!

Bucked Up Energy as their WOKE AF, Bucked Up and BAMF supplements are available at BuckedUp.com, as well as your local Vitamin Shoppe and GNC locations.

Exploding out of Seattle, Wash., hotly-tipped hard rock five-piece AVOID have been rapidly making a name for themselves to their electrifying live shows and an unabashed experimental approach to music.

The result is an alchemistic audio dose of heavy hedonism; the stamp of a young act unafraid to equally embrace both their innovation and individuality.

Forming in 2017, AVOID’s debut full length ‘Alone’ was released in 2018, garnering more than 1.5 million streams to date and strong Spotify playlisting support. The record debuted at No. 3 on Billboard’s Heatseekers Pacific Chart.

The 22-year-old will make his second debut at the track dubbed “Too Tough To Tame.”

Now, 21 races down, 12 races to go, Graf Jr. is ranked 21st in the Xfinity Series championship standings and looks to improve his average finish of 23rd over the final nine weeks of the season.

From the Pit Box: Industry veteran Patrick Donahue is Joe Graf Jr.’s crew chief. He will crew chief his 175th NASCAR Xfinity Series races on Saturday and Sunday. In his previous 174 races, he has two wins, eight top-five and 14 top-10 finishes to his resume.

He has seven prior Xfinity races as crew chief at Daytona with a best finish of eighth in July 2019 with Gray Gaulding.

This Is 2020: Entering Daytona, Graf Jr. has 24 NASCAR Xfinity Series starts to his credit with four top-15 and nine top-20 finishes. After 21 races in 2020, he stands 21st in the championship standings with 12 races remaining.

The 22-year-old Gaulding will make just his second start of 2020 with SS GreenLight Racing and eyes his third straight top-10 finish on a superspeedway dating back to Daytona last July.

On Dover International Speedway Doubleheader: “It was a solid weekend at Dover. There isn’t anything quite like the Monster Mile that I’ve ever competed in racing. We made gains in both races and were able to come away with a lot of notes and some momentum going into Daytona this weekend.”

On Daytona International Speedway: “I’m really excited about going to Daytona this weekend. The entire SS GreenLight Racing team really puts a lot of work into their superspeedway program and we showcased a lot of speed at Daytona and Talladega earlier this year before we got collected in someone else’s misfortune.

“A top-10 finish would be huge for us on Friday night. A top-five would feel like a win. Daytona is a place for opportunity, I just hope luck is on our side.”

On The Components of Superspeedway Racing: “Obviously a good car and engine is crucial to success at Daytona. Bobby (Dotter, car owner) puts a lot of emphasis on these races and we’ve got a good Richard Childress Racing motor under the hood this weekend.

“You also have to be able to trust your spotter. “Pockets” (spotter Brian Crammer) does a good job on letting me know what I need to know. He works with other spotters well; it’s just about putting you in the right place at the right time when it counts.

“It doesn’t hurt either to have a good teammate. Gray is pretty experienced when it comes to these superspeedways, so I hope I’m able to work with him and we have the chance to put both SS GreenLight Racing cars in the top-10 when its all said and done.”