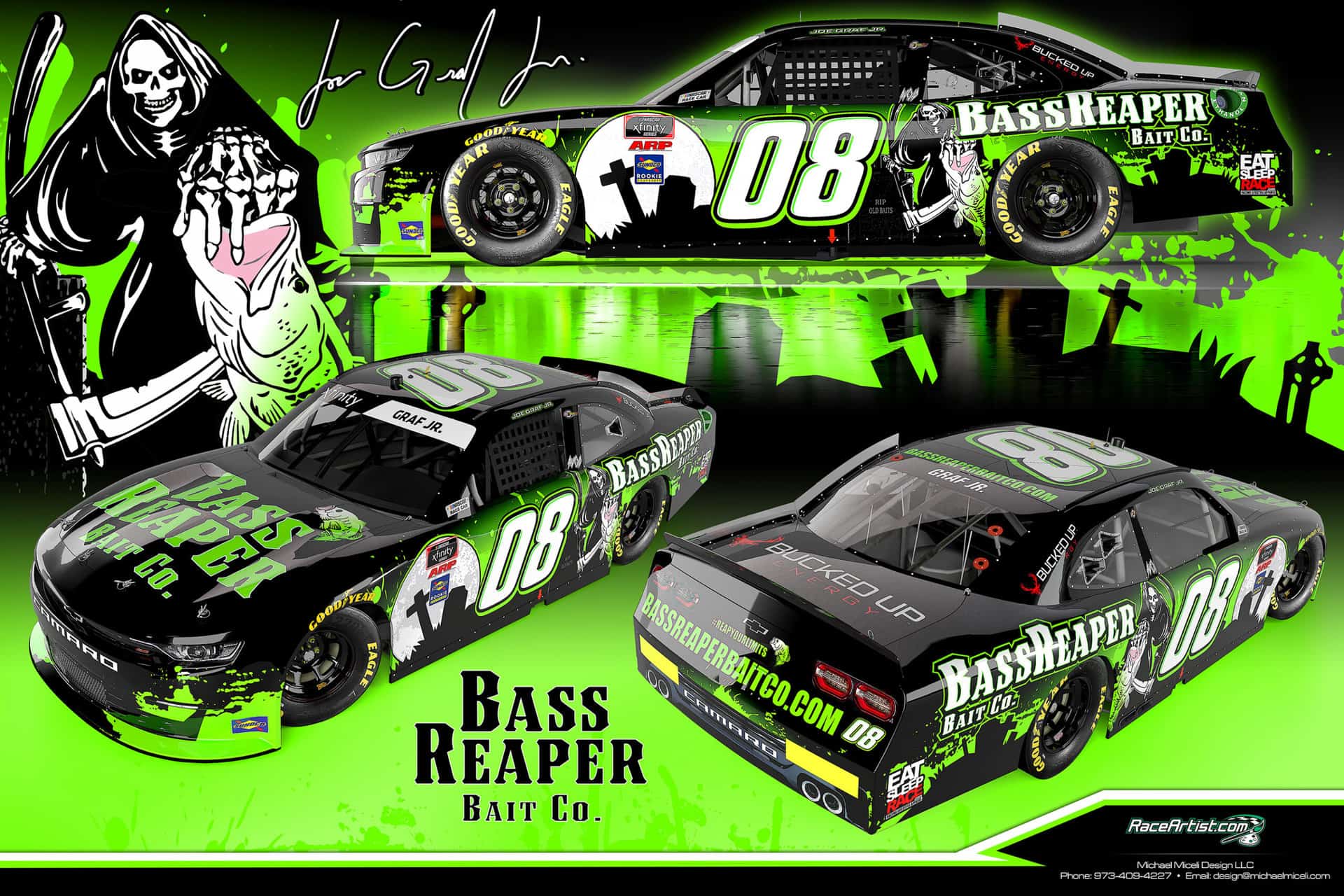 Born in 2019 from a family driven by professional fishing, BassReaper Bait Co. is a manufacturer of high-quality soft plastic bass fishing lures and bass fishing tackle.

Whether you are a professional angler or new to the sport of fishing, BassReaper Bait Co. has fishing tackle to get the job done.

Their soft plastics are proudly made in the United States of America.

Kansas Speedway Recap: After a solid top-15 finish at the Charlotte (N.C.) Motor Speedway ROVAL, Joe Graf Jr. and the SS GreenLight Racing team carried momentum to Kansas Speedway. While running competitively inside the top-20, Graf Jr. experienced a gear failure which resulted in an early exit from the Kansas Lottery 300 and a disappointing 32nd place finish.

In July, Graf Jr. made his track debut where he started 25th and steadily moved forward to earn a respectable 21st place finish.

Joe Graf Jr. Xfinity Series Career Intermediate Nuggets: At tracks greater than 1.0-mile in size, Graf has competed in 16 NASCAR Xfinity Series races. He holds an average starting position of 24.0 and an average result of 21.8.

Say Whaaat?: For at least the next month, Joe Graf Jr. and partner Bucked Up Energy are allowing one lucky fan the opportunity to win a year’s supply of Bucked Up Energy or over $1,000 in cash!

Plus, the more you promote the contest yourself, the more entries you receive!

TikTok, TikTok: Continuing to increase his social media presence, Joe Graf Jr. recently joined TikTok. Search “Joe Graf Jr.” and follow the NASCAR Xfinity Series rookie for a glimpse of his entertaining life on and off the track.

Now, 30 races down, three races to go, Graf Jr. is ranked 23rd in the Xfinity Series championship standings and looks to improve his average finish of 24th over the final three weeks of the season.

From the Pit Box: Industry veteran Patrick Donahue is Joe Graf Jr.’s crew chief. He will crew chief his 184th NASCAR Xfinity Series races on Saturday. In his previous 183 races, he has two wins, eight top-five and 14 top-10 finishes to his resume.

He has nine prior Xfinity races as crew chief at Texas Motor Speedway with a best finish of 13th twice in March 1999 with NASCAR Hall of Famer Jeff Gordon and in Nov. 2019 with Gray Gaulding.

This Is 2020: Entering Texas, Graf Jr. has 33 career NASCAR Xfinity Series starts to his credit with five top-15 and 11 top-20 finishes. After 30 races in 2020, he stands 23rd in the championship standings with three races remaining.

On Kansas Speedway: “This one stings a little. We had a really good No. 08 Bucked Up Energy Chevrolet and were just hovering inside the top-20 and then we had a gear failure.

“I’m bummed because I really think we would have been able to escape Kansas with a top-15 or better. We’ll get regrouped and try again for Texas.”

“I’m encouraged by our speed last weekend at Kansas Speedway even if we didn’t have the finish we were looking for. Texas Motor Speedway is a tough intermediate track, but I learned a lot in July and we ended up with a decent finish.

“This weekend, I hope we’re able to finish what we started at Kansas and get ourselves a top-15 or better.”