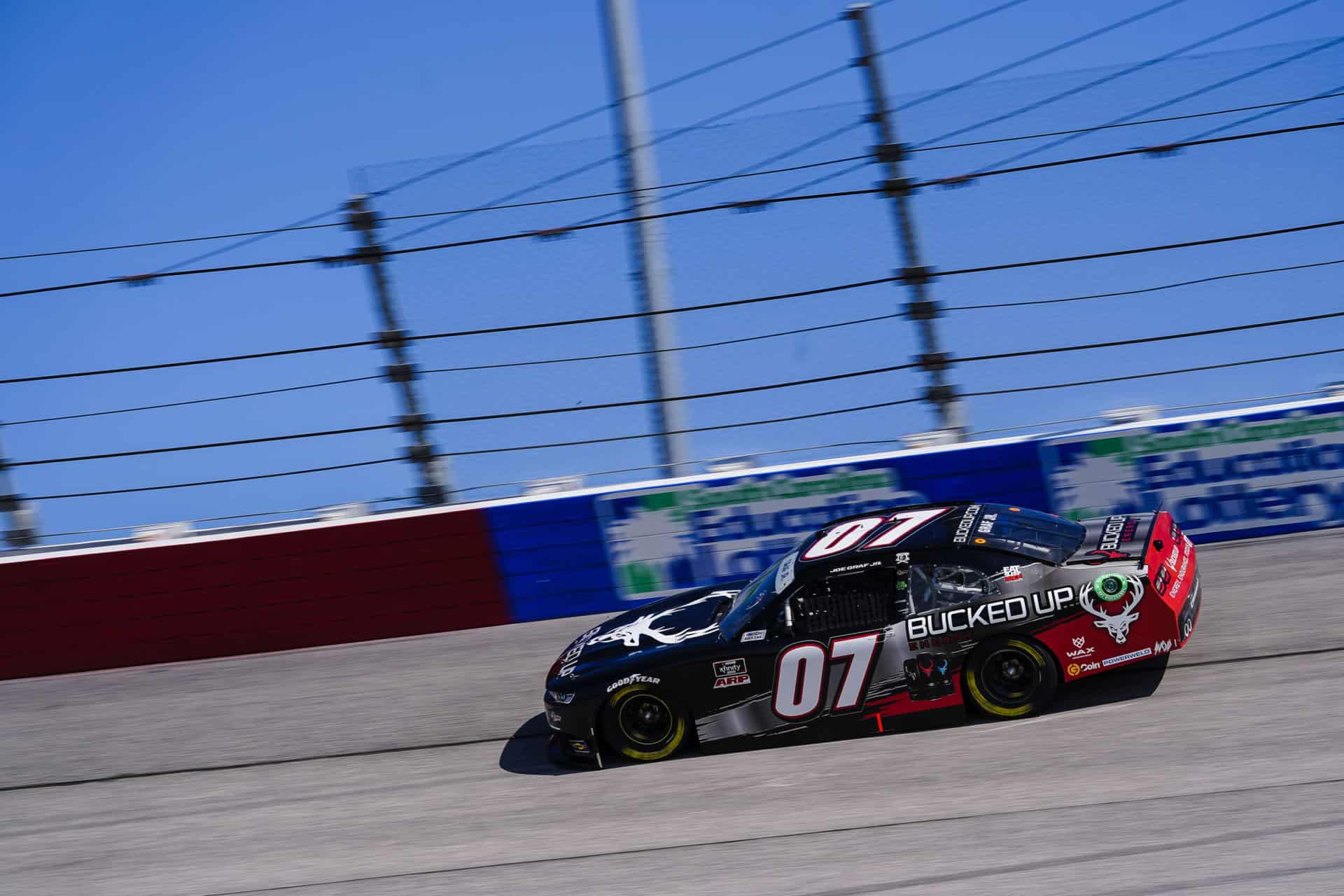 Full of Energy: Bucked Up Energy and its sister products will continue their role as the primary partner of Graf’s No. 07 Chevrolet Camaro this weekend. Richmond Raceway is the eighth race of 2021 but is the 30th race overall in a multi-year, multi-race deal with the former ARCA Menards Series winner.

Low-stim has the same innovative ingredients that make their OG formula so powerful for focus, mood, motivation and energy. Bucked Up made just one small change and they have been surprised by the resulting epicness. Boasting a modest of 100mg of caffeine, Bucked Up Low-Stim delivers the same energy, focus, mood, motivation – while reducing the common side effects that come from too-much caffeine, jitters, sleeplessness and anxiety.

Races for Faces: Joe Graf Jr. announced in mid-August that for the second consecutive year, Graf will be virtually participating in myFace’s Races for Faces, an event to raise awareness for myFace, an organization that helps kids and families living with craniofacial differences.

Graf is encouraging in the industry along with race fans to join “Team Graf” and show your support of his mission.

Graf’s No. 07 Chevrolet Camaro will carry a decal showcasing the 9/11 Memorial and Museum on a prominent location on their automobile.

Additionally, between Laps 9 – 11 during the race, the SS GreenLight Racing pit crew will unfurl both an American flag and a 9/11 Memorial and Museum flag and stand on the pit road wall.

Following Lap 11, the SSGLR team will display the flags from their pit stall location for the remainder of the race.

Fans in attendance will also be asked to stand in honor of the day during the three-lap tribute.

CoverSeal® —the standout cover option keeping vehicles and other outdoor investments safe from rodents and the weather will serve as associate marketing on the No. 07 Chevrolet Camaro for this weekend’s race at Richmond (Va.) Raceway and at Kansas Speedway next month.

At Martinsville (Va.) Speedway, however, on Sat., Oct. 30, 2021 — CoverSeal® will increase their commitment and serve as the primary marketing partner for the penultimate NASCAR Xfinity Series race of the season.

Saving You Some Money: As summer slowly starts to transition into fall, Joe Graf Jr.’s other marketing partner Z Grills wants to help the NASCAR community save money – but also enjoy the perfect barbecue.

In support of their recent partnership at Atlanta (Ga.) Motor Speedway in July, Z Grills Racing (ZGrillsRacing.com) is offering a 10 percent discount off your TOTAL purchase, using the code NASCAR at checkout.

He holds an average starting position of 24.3 and an average result of 22.3 and has been running at the conclusion of seven of the eight races.

The effort was a huge boost to Graf and the Joe Williams-led team after the team mounted their first top-20 finish since Las Vegas (Nev.) Motor Speedway in March.

He will crew chief his 57th NASCAR Xfinity Series race as crew chief on Saturday afternoon and his third at the 0.875-mile short track.

In his previous 56 NASCAR Xfinity Series starts, he has collected four top-five and 14 top-10 finishes.

Hello From The Other Side: Graf Jr. has a teammate at SS GreenLight Racing. Veteran JJ Yeley will drive the No. 17 Chevrolet Camaro on Saturday afternoon for his 10th start of the 2021 season.

Yeley is set to make his 345th career NASCAR Xfinity Series start and 24th at Richmond Raceway. His best Xfinity track finish occurred twice, but most recently in the 2016 ToyotaCare 250, where he finished 12th after starting 19th for TriStar Motorsports.

On Richmond: “I’m looking forward to Richmond Raceway this weekend. Richmond is a track I’m very comfortable with and earned a solid top-15 finish in my track debut in 2019. Last fall, it was a doubleheader weekend and while the Friday race was kinder to us than Saturday was, I still feel confident we can go and have a strong showing this weekend and propel our team forward as we approach the final stretch to the 2021 NASCAR Xfinity Series season.

“Saturday is also going to be a day of remembrance for us. It will be twenty years since the September 11th attacks and I feel like as a team we are proud to join NASCAR in their initiatives and remember those who lost their lives on that day.

On Darlington Finish: “I am super proud of our SS GreenLight Racing team. We stayed on the lead lap for most of the race, got ourselves a break when we went a lap down and made our car better for the final run to the checkered flag.

“A top-20 finish felt like a win for us after the crummy season we’ve had and we’re taking this momentum to Richmond and hopeful we can back it up with another top-20 finish or better on Saturday.”