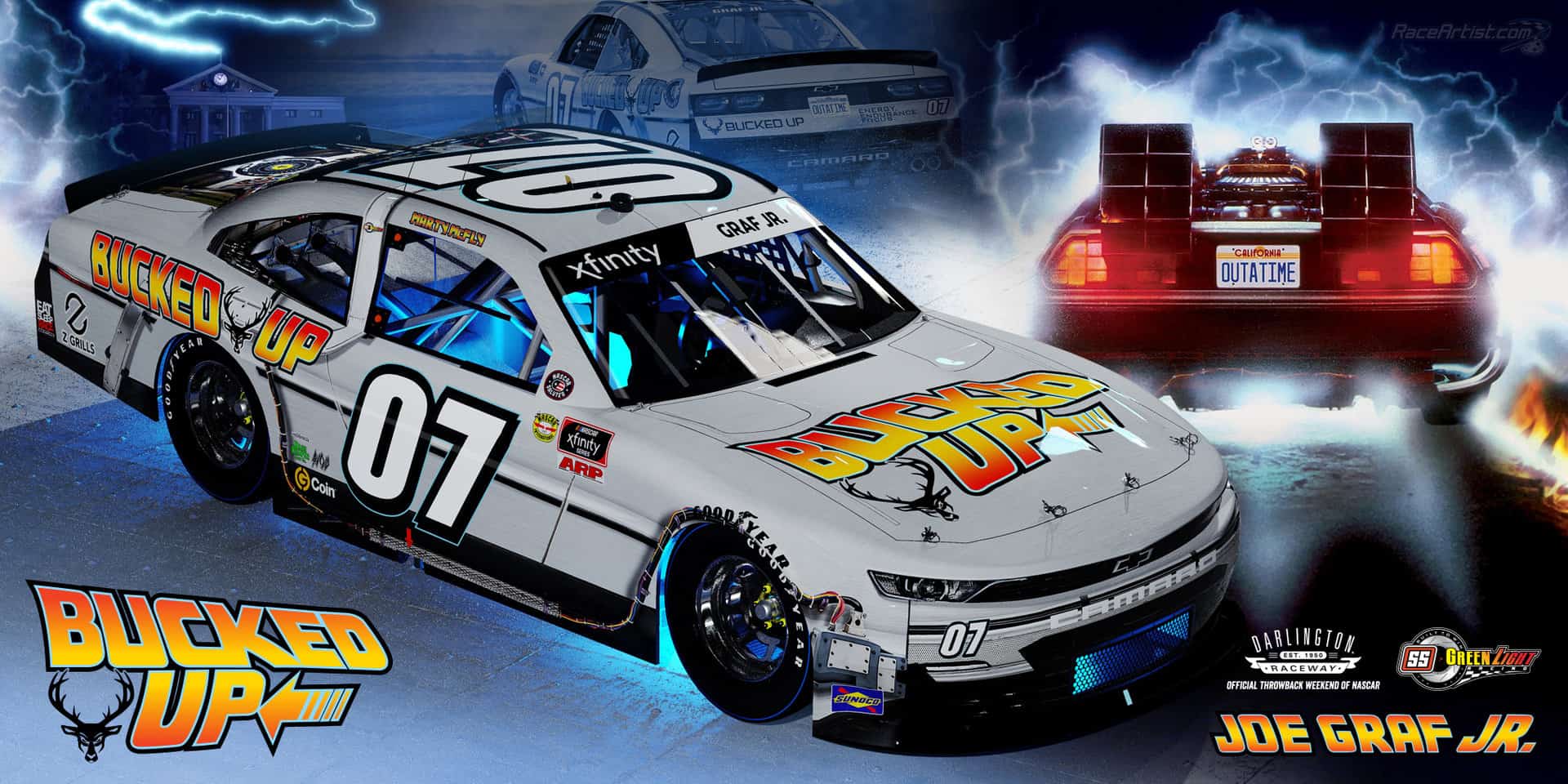 Full of Energy: Bucked Up Energy and its sister products will continue their role as the primary partner of Graf’s No. 07 Chevrolet Camaro this weekend. Darlington is the fifth race of 2021 but is the 27th race overall in a multi-year, multi-race deal with the former ARCA Menards Series winner.

Great Scott!: On Wednesday, Joe Graf Jr. and his SS GreenLight Racing unveiled their Darlington Raceway NASCAR throwback paint scheme with a tribute to the 1986 blockbuster film “Back to the Future.”

Graf’s No. 07 Bucked Up Chevrolet has been transformed to look similar to the DMC DeLorean utilized during the film starring Christopher Lloyd and Michael J. Fox.

Graf has acquired a retro Back to the Future outfit that Fox portrayed his role as Marty McFly Jr. that he’ll adorn before climbing into race car Saturday afternoon.

Look At Those Shoes! As part of his wardrobe for this weekend at Darlington, Graf Jr. will pull a popular item from his personal shoe collection. He’ll sport the NIKE Dunk SB Low Marty McFly shoes that he obtained last October.

This weekend will mark the first time Graf has worn the shoes since the purchase. Over the last seven months, the specific brand has increased in popularity as well as value with an estimated worth of nearly $800.00 in new condition.

Cast Your Vote!: The vote is on for the best NASCAR Xfinity Series Throwback paint scheme of the 2021 season.

Between now and 12:00 p.m., you can vote Joe Graf Jr.’s “Back to the Future” throwback as your favorite scheme by casting your vote here.

On the heels of their second race partnership of the season last month at Talladega Superspeedway, Z Grills Racing (ZGrillsRacing.com) is offering a 10 percent discount off your TOTAL purchase, using the code JoeGraf07 at checkout.

In the fall, he finished as respectable 23rd after starting 28th in a throwback paint scheme to retired Xfinity Series driver Elliott Sadler.

Joe Graf Jr. Xfinity Series Career Intermediate Nuggets: At tracks greater than 1.0-mile in size, Graf has competed in 22 NASCAR Xfinity Series races. He holds an average starting position of 23.5 and an average result of 22.6.

Racing For That Degree Too: While preparing for Saturday’s Steakhouse Elite 200 at Darlington, Joe Graf Jr. has also been busy hitting the books studying for finals in pursuit of a degree in business, media and sports management from New York University (NYU). He is expected to graduate in 2022.

In addition to Wise, Graf has also been working with former NASCAR driver and open wheel driver Scott Speed on being more discipline behind the wheel of his No. 07 Bucked Up Energy Chevrolet Camaro.

He will crew chief his ninth NASCAR Xfinity Series race as crew chief on Saturday afternoon.

Hello From The Other Side: Graf Jr. has a teammate at SS GreenLight Racing. Veteran JJ Yeley will drive the No. 17 WORKPRO Chevrolet Camaro on Saturday afternoon.

Yeley is set to make his 339th career NASCAR Xfinity Series start and 11th at the famed 1.366 mile speedway. His best Xfinity track finish occurred in the 2006 Diamond Hill Plywood 200 where he finished ninth after starting 35th driving for Joe Gibbs Racing.

On Darlington Raceway: “I am optimistic about Darlington Raceway this weekend. Last spring, I think we impressed a lot of people with a top-20 finish from the back. I know we can do that again; we just need some help in the luck department.

“I like how aggressive you need to be to tackle Darlington and I hope that will play into our hands-on Saturday afternoon. We have a great-looking throwback car and I’m determined to put it near the front.”

On Throwback Scheme: “Who doesn’t love the movie Back to the Future? Our team worked hard on the concept and I think we did a great job executing our throwback scheme. The car looks great, and we have attracted a lot of attention with it, I just hope we can have a strong finish on Saturday to top it all off.”

On 2021 Season: “The last few races have been tough, but we will bounce back. As a team, we know what we are capable of. We started off the year strong and we are determined to do everything in our power to get back to that consistency and look ahead with positivity.”