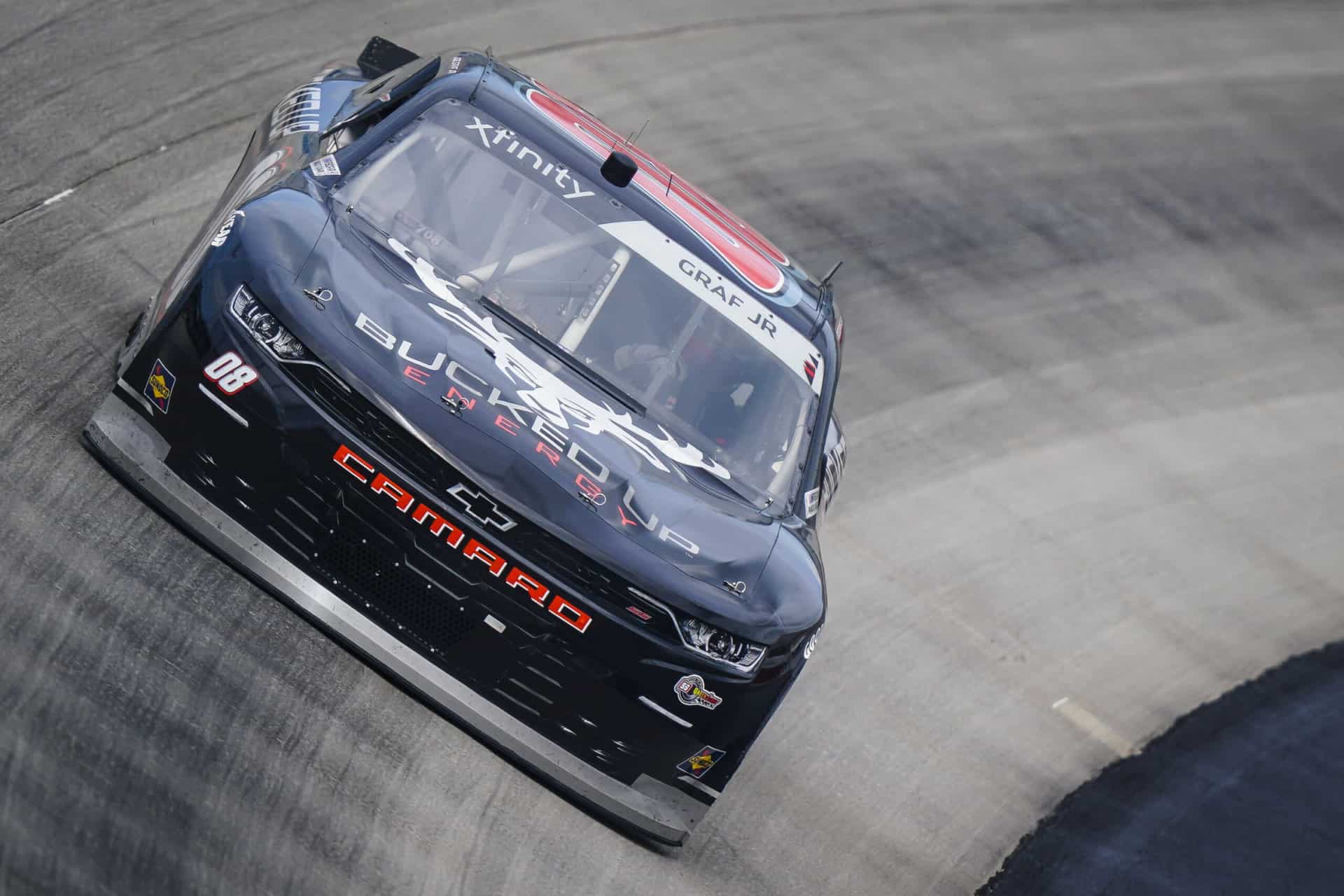 Chassis No. 709 also ran at Richmond Raceway in September 2019 with a 22nd place finish after also qualifying ninth.

Full of Energy: Bucked Up Energy and its sister products will continue its role as the primary partner of Graf’s No. 08 Chevrolet Camaro. Richmond Raceway is the 16th race in a multi-year, multi-race deal with the former ARCA Menards Series winner.

Lady In Black Recap: Joe Graf Jr.’s return-trip to the track Too Tough To Tame yielded a respectable result.

Despite starting 28th, Joe Graf Jr. in a throwback paint scheme to NASCAR Xfinity Series driver Elliott Sadler from the 2010 season, the 22-year-old battled the handling on his No. 08 Bucked Up Energy Chevrolet to a 23rd place finish.

Last fall, Graf Jr. made his third and final Xfinity Series start of the season for Richard Childress Racing, securing a then career-best 14th place finish.

He holds an average starting position of 24.3 and an average result of 15.3 and has been running at the conclusion of all three events.

Joe Graf Jr. ARCA Menards Series Career Short Track Nuggets: At tracks classified as short tracks with a track length of under 1.0-mile, Graf has competed in 18 ARCA Menards Series races. He holds an average starting position of 9.8 and an average result of 8.8, including a win at Berlin (Mich.) Raceway in 2018.

At Homestead, Graf Jr. finished 16th and 13th respectively, while in the Bluegrass state of Kentucky, the former ARCA Menards Series winner earned a 13th and 22nd place finish, respectively.

Most recently at the Monster Mile in Dover, Del. he finished 18th and 21st respectively.

Now, 23 races down, 10 races to go, Graf Jr. is ranked 22nd in the Xfinity Series championship standings and looks to improve his average finish of 23rd over the final eight weeks of the season.

From the Pit Box: Industry veteran Patrick Donahue is Joe Graf Jr.’s crew chief. He will crew chief his 177th and 178th NASCAR Xfinity Series races on Friday night and Saturday afternoon. In his previous 176 races, he has two wins, eight top-five and 14 top-10 finishes to his resume.

He has 10 prior Xfinity races as crew chief at Richmond with a best finish of seventh in May 2002 with Brian Vickers.

This Is 2020: Entering Richmond, Graf Jr. has 26 career NASCAR Xfinity Series starts to his credit with four top-15 and nine top-20 finishes. After 23 races in 2020, he stands 22nd in the championship standings with 10 races remaining.

On Darlington (S.C.) Raceway: “Not a terrible day in our No. 08 Bucked Up Energy Chevrolet by any means. Car came home clean. We dodged a bullet with that wreck right in front of us at the end of Stage 2 too.

“Unfortunately, we got stuck a lap down and just couldn’t catch the free pass. Overall, though an alright day for us.

“Looking forward to the doubleheader at Richmond!”

On Richmond (Va.) Raceway: “I’m looking forward to Richmond on Friday night. I feel like we really have an opportunity to have a good finish with our No. 08 Bucked Up Energy Chevrolet.

“I had a really good outing last September with Richard Childress Racing and I’m hoping I can build on that experience Friday night for Bobby (Dotter), Patrick (Donahue) and have another strong finish for our SS GreenLight Racing team.”

On Richmond Doubleheader Weekend: “This is our last doubleheader weekend of the season and I’d really like to leave Richmond Raceway on Saturday afternoon with some momentum to carry us forward not only to Bristol but the rest of the 2020 Xfinity Series season.”