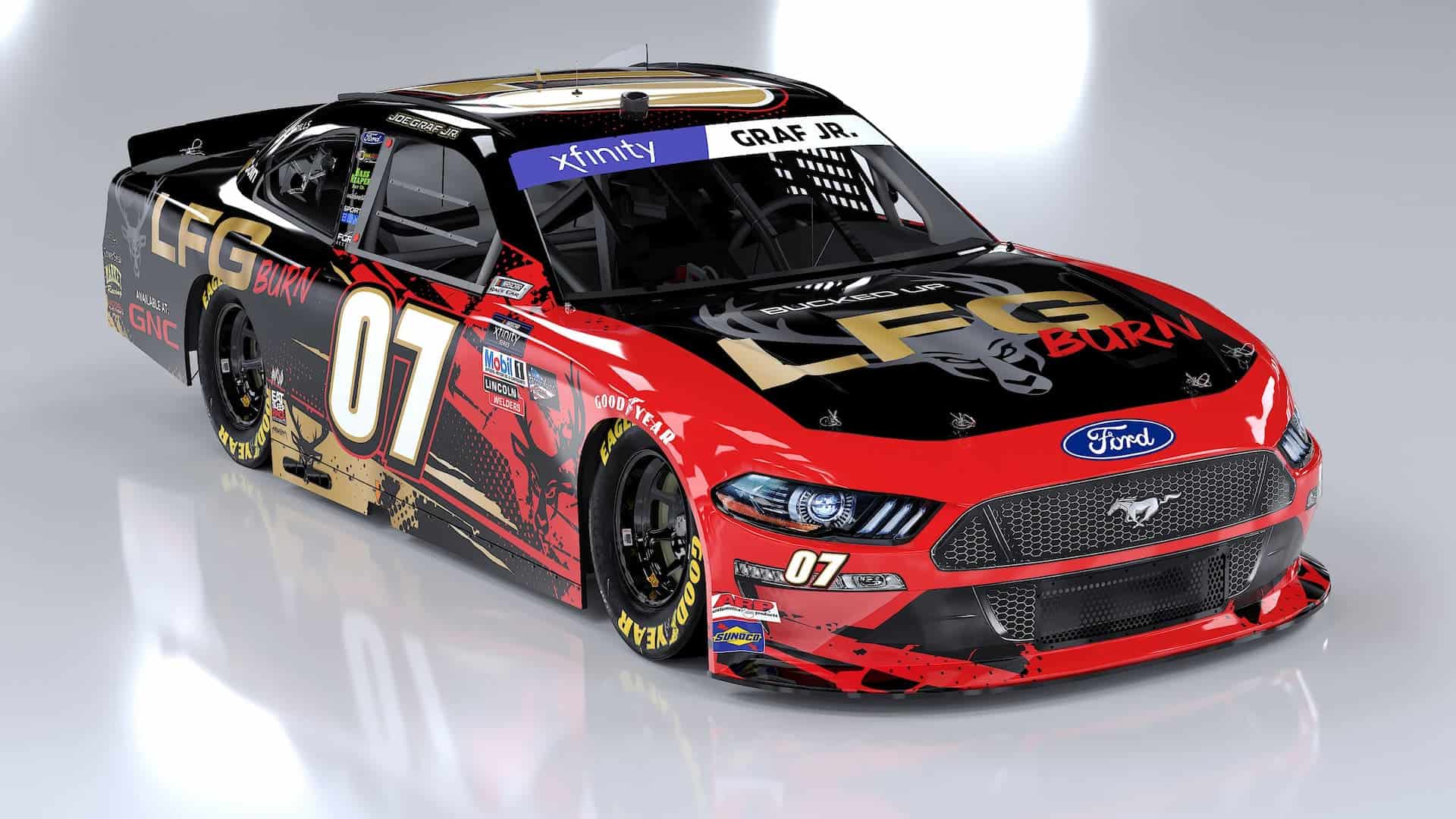 Full of Energy: Bucked Up Energy Drink and its sister products will continue their role as the primary partner of Graf’s No. 07 Ford Mustang this weekend. Las Vegas (Nev.) Motor Speedway is the third race of 2022 but is the 34th race overall in a multi-year, multi-race deal with the former ARCA Menards Series winner.

This weekend, Bucked Up will promote it’s new Bucked Up LFG Burn product.

LFG Burn is a revolutionary pre-workout specifically designed to optimize fat loss. Designed to complement your hard work, LFG acts as both a pre-workout and a fat burning supplement.

New Year, But New Look: In January, SS GreenLight Racing with Jeff Lefcourt (SSGLRwJL) announced the organization would switch from Chevrolet to Ford and have a technical alliance with Stewart-Haas Racing.

In addition to providing race cars to SSGLRwJL, SHR will also provide technical support for the entire 33-race season.

Surprise Awaits: Joe Graf Jr., SS GreenLight Racing with Jeff Lefcourt and Bucked Up Energy Drink will showcase for the first time in NASCAR one of their original energy drink flavors next weekend at Phoenix (Ariz.) Raceway for the United Rentals 200, the fourth race of the 2022 NASCAR Xfinity Series season.

In his previous four efforts, Graf has delivered a track-best of 18th earned in March 2021’s Alsco Uniforms 300 after starting 26th.

Joe Graf Jr. Xfinity Series Speedway Nuggets: At tracks greater than 1.0-mile in size, Graf has competed in 33 NASCAR Xfinity Series races with an average starting position of 26.3 and an average result of 25.0.

Auto Club (Calif.) Speedway | Production Alliance Group 300 Race Recap: In the most recent NASCAR Xfinity Series race at Auto Club Speedway, Graf jumped through a series of obstacles to deliver a strong lead-lap 15th place finish in the second race of the season.

The effort vaulted Graf to 19th in the Xfinity Series championship standings and delivered a career-best finish for him at the 2.0-mile track.

He will crew chief his 68th NASCAR Xfinity Series race as crew chief on Saturday night and his fifth at the 1.5-mile speedway.

Hello From The Other Side: Graf Jr. has a teammate at SS GreenLight Racing with Jeff Lefcourt. Veteran David Starr will drive the No. 08 TicketSmarter Ford Mustang on Saturday for his first start of the 2022 season.

Starr is set to make his 235th career NASCAR Xfinity Series start and 11th at Las Vegas Motor Speedway. His best Xfinity track finish occurred in the 2015 Boyd Gaming 300, where he finished 17th after starting 31st for TriStar Motorsports.

“This year, he’s apart of our SS GreenLight Racing with Jeff Lefcourt team looking to continue to make a difference but on a much larger scale. The partnership has already reaped benefits with the win at Auto Club Speedway.

“He and Bobby (Dotter) have big plans for the future and I’m just glad to be a small part of it.”

On 2022 Season Outlook: “We have made a lot of changes during the offseason. From switching manufacturers to bringing in new personnel, it’s all for the better. Honestly, I would be disappointed if we weren’t able to showcase ourselves a strong capable team throughout the season.

“We’ve already shown what our SS GreenLight Racing with Jeff Lefcourt team can do when everything goes our way. The Auto Club win for Cole Custer was huge for our team and we definitely want to build on that in the weeks and months ahead.”

“Consistent top-10 finishes for myself should not be out of the question and hopefully by Phoenix in November, we will be racing near the front on a consistent basis.”