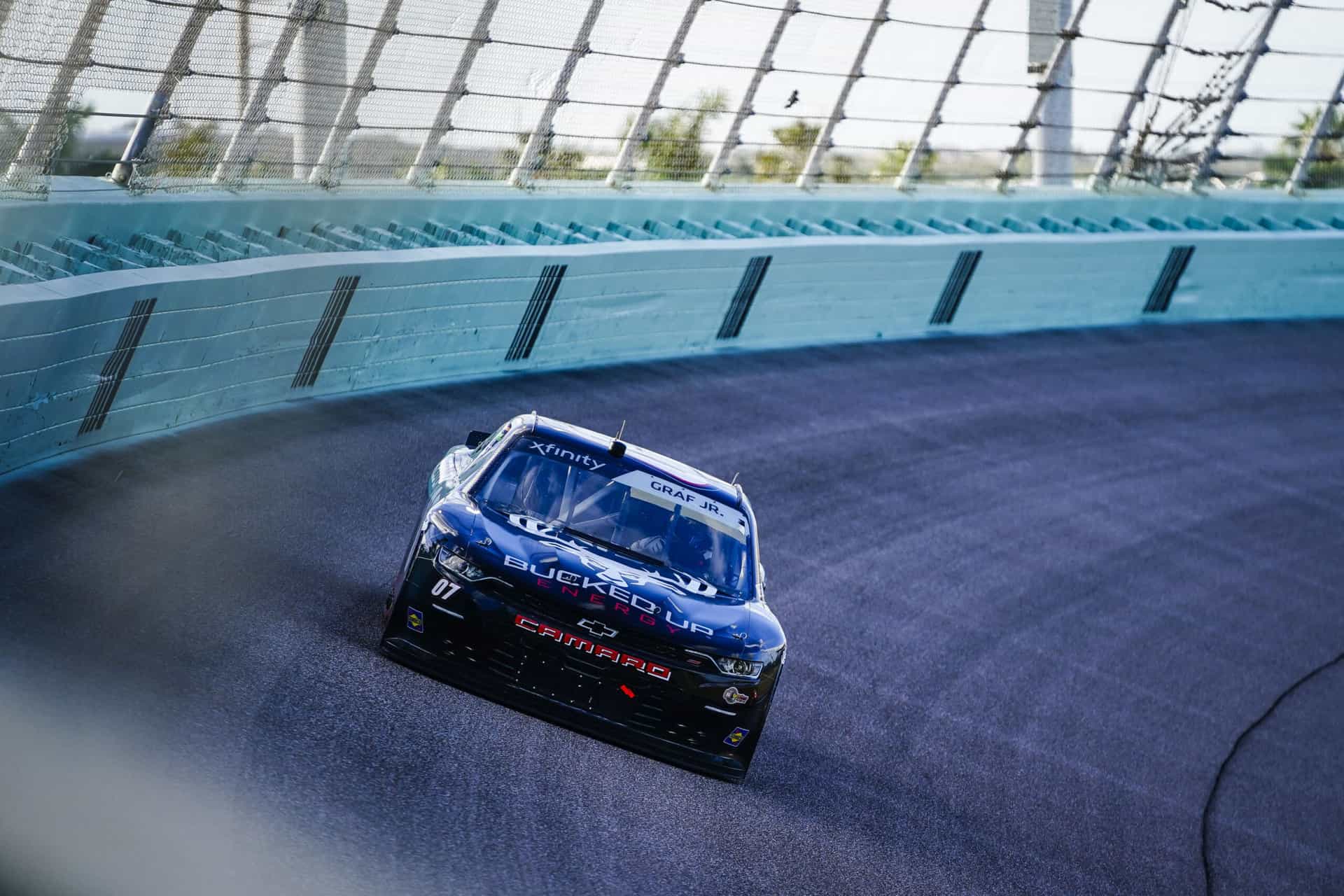 Chassis No. 708 is also the same car that Graf Jr. raced in both NASCAR Xfinity Series races at Homestead-Miami Speedway in June 2020 and at Texas Motor Speedway on October 24, 2020.

Full of Energy: Bucked Up Energy and its sister products will continue their role as the primary partner of Graf’s No. 07 Chevrolet Camaro this weekend. Las Vegas is the fourth race of 2021 but is the 26th race overall in a multi-year, multi-race deal with the former ARCA Menards Series winner.

Bucked Up A Little More: In addition to serving as the primary marketing partner for Joe Graf Jr. this weekend at Las Vegas (Nev.) Motor Speedway, Bucked Up will serve as the title partner of the NASCAR Camping World Truck Series Bucked Up 200 at LVMS on Fri., Mar. 5.

Additionally, Joe Graf Jr. investor and Buffalo Bills running back Antonio Williams will serve as the grand marshal for the third Truck Series race of the season.

Did You See All That Smoke?: Z Grills, one of the most respected names in pellet grills was officially announced last Friday as a new marketing partner for Joe Graf Jr. and SS GreenLight Racing with their debut in the NASCAR Xfinity Series set for March 13th, 2021 at Phoenix (Ariz.) Raceway.

As an industry leading manufacture for more than 30 years, Z Grills manufactured grills, kitchen equipment and outdoor products for several top brands in the industry.

Year of the Underdogs: Heading to Homestead-Miami Speedway last weeK, Buffalo Bills running back Antonio Williams and a personal investor in Joe Graf Jr.’s racing career launched a video on Twitter offering an exclusive glimpse into his personal life and his reason for wanting to be a part of NASCAR – exclusively with Graf Jr.

In his debut at LVMS, Graf Jr. was leading when the rain was postponed for rain. He went on to finish 20th in the Boyd Gaming 300. When he returned in the fall, he finished a disappointing 27th.

Joe Graf Jr. Xfinity Series Career Intermediate Nuggets: At tracks greater than 1.0-mile in size, Graf has competed in 19 NASCAR Xfinity Series races. He holds an average starting position of 23.7 and an average result of 22.4.

Homestead-Miami Speedway Race Recap: After starting 16th, Joe Graf Jr. was able to maintain a presence inside the top-20 for much of the Contender Boats 250, but a series of late-race circumstances slid the No. 07 Bucked Up Energy Chevrolet Camaro in the running order to 27th when the checkered flag was thrown.

He will crew chief his fourth NASCAR Xfinity Series race as crew chief on Saturday afternoon.

Hello From The Other Side: Graf Jr. has a teammate at SS GreenLight Racing. Veteran JJ Yeley will drive the No. 17 Work Pro Ford Mustang on Saturday afternoon.

Yeley is set to make his 337th career NASCAR Xfinity Series start and 15th at the 1.5-mile speedway. Last year, he qualified a track-best fifth for Jimmy Means Racing, but has a best finish of eighth in 2006 driving for Joe Gibbs Racing.

On Las Vegas Motor Speedway: “Las Vegas is special to me because it is the first laps I led in NASCAR Xfinity Series competition. With that being said, we want to have a strong rebound from the fall race last year and from Homestead last weekend.

“Las Vegas is a fun place to race but you have to make sure the car rotates like you want so you can set yourself up to make the passes to move forward. I am hoping for a strong finish to carry some momentum for the West Coast swing.”

On First Races Of 2021 Season: “Overall, I think we are satisfied. We didn’t have the performance we wanted last week at Homestead, but it was not because of the lack of effort, just had some misfortune late in the race.

“I think our team is capable of a lot this season and I’m eager to showcase that as the year marches on.”

On New Z Grills Partnership: “I am thrilled to welcome Z Grills to NASCAR and to our SS GreenLight Racing team. Grilling at race tracks has always been a staple of the environment whether you are up close and personal with the race team or race fans bonding in the infield talking about their race track experience.