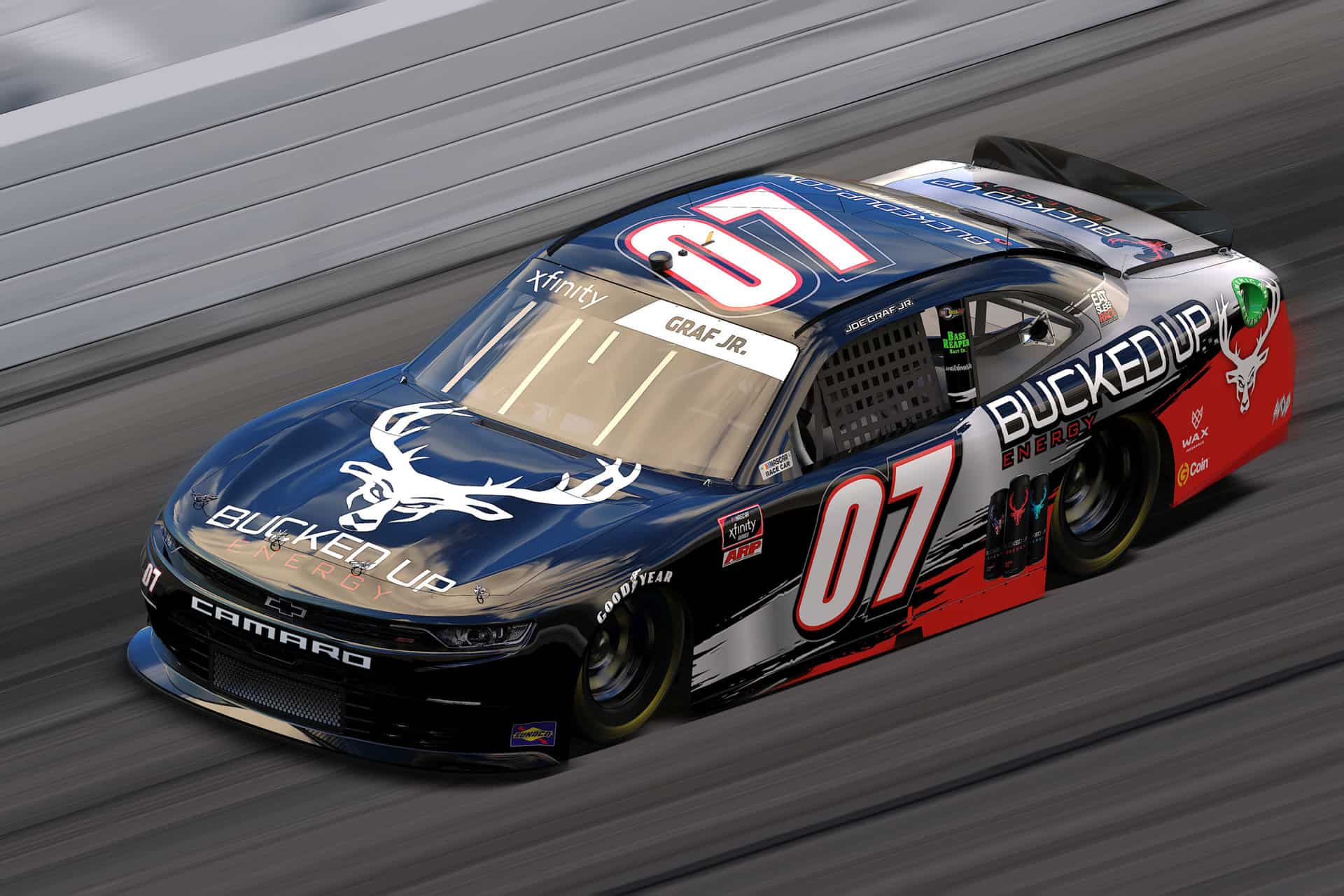 MOORESVILLE, N.C.:  Joe Graf Jr. will return to the NASCAR Xfinity Series this season with SS GreenLight Racing aboard the No. 07 Chevrolet Camaro beginning with the season-opener Beef. It’s What’s For Dinner 300 at Daytona (Fla.) International Speedway on Saturday, Feb. 13, 2021.

Bucked Up Energy will serve as the primary marketing partner for Graf’s fourth Xfinity Series race at Daytona.

Graf returns with the Bobby Dotter-owned team on the heels of a productive rookie season where he earned several top-15 and numerous top-20 finishes.

“I can’t wait for the NASCAR Xfinity season to start,” said Graf. “2020 was a surreal learning experience.

“Racing so many tracks for the first time without getting any practice due to Covid-19 was tough. However, I believe conquering those challenges last season will allow us to have a more productive and competitive sophomore season.”

“Bobby (Dotter, team owner) and the SS Greenlight Racing team have been working hard to prepare cars for the upcoming season. I can’t wait to get to Daytona.”

The coronavirus pandemic certainly presented its challenges to the NASCAR industry in 2020 and affected rookies exceptionally hard. For much of the Xfinity’s 33-race schedule, Graf battled at race tracks he had never turned a lap on.

Persevering through it all, the team made substantial gains from February to November and has taken additional steps during the offseason with the intention of contending for a position in the NASCAR Xfinity Series Playoffs this year.

“We have had a super busy off-season,” added Graf. “We are happy to share that we will be bringing in several new partners to NASCAR and the Xfinity Series throughout the season. We have also focused on enhancing our team and equipment, so we have a shot to make the Playoffs.”

“I have been fortunate enough to surround myself with some NASCAR veterans who have helped me get in the best shape of my life and offer me critical advice on racecraft. Again, this season we have set our bar high for on-track performance and I believe our focus will pay off.”

“I am really excited to have Joe back after the progress he showed towards the end of last season,” added Dotter. “Having been to the tracks now should really help Joe continue to show what we can do as a team and cannot wait to get the 2021 season underway.”

For 2021, Graf jumped on the opportunity to change his car number to No. 07. The former ARCA Menards Series winner has a long history with the No. 07. It was his first car number when he raced Bandoleros at Bethel (N.Y.) Motor Speedway in 2009 and it also was the car number his father, Joe Sr. raced for many years.

“I am really excited about having Mike as a crew chief,” sounded Graf. “Mike is a knowledgeable and disciplined guy.  He is a really smart guy who knows what it takes to move our program forward. Racing is the ultimate team sport, and we needed a guy like Mike who could fit seamlessly with our team.

“Most importantly he is a great fit with our core group of guys who have been the backbone of SS GreenLight racing for years. His experience at Germain Racing, GMS Racing and Rick Ware Racing has really prepared him for this opportunity to lead as crew chief.”

Tyska, a native of New York has experience in all three of NASCAR’s national divisions and was a part of Todd Bodine’s 2006 championship season in the NASCAR Camping World Truck Series.

Longtime industry veteran and New York native, Robin Pemberton will be joining SS Greenlight Racing as a consultant this season. Pemberton brings a wealth of knowledge and experience from his time as NASCAR Senior Vice President of Competition to his 17 years as a crew chief for drivers such as NASCAR Hall of Famers Rusty Wallace and Mark Martin, as well as Kyle Petty.

“I have been so fortunate that Mr. Pemberton gave me some guidance last year,” Graf said. “His advice on how to approach tracks for the first time and how to stay mentally tough has been invaluable. To have him join SS GreenLight in a more formal role is amazing.”

About Bucked Up Energy:

Bucked Up is the everyman (or woman) energy drink. We don’t care about the color of your collar; whether blue or white, we all require energy to power our days. We want something that tastes like success, enhances mood and focus, and most of all, delivers long-lasting energy.

Bucked Up Energy boasts 300mg of caffeine as well as two added stimulants. This trifecta works synergistically to keep you going all day.

On top of that, we added Beta-Alanine; this powerhouse ingredient delivers a faint tingle, signaling that it’s time to work — and earn success.

We want that success. Don’t you?