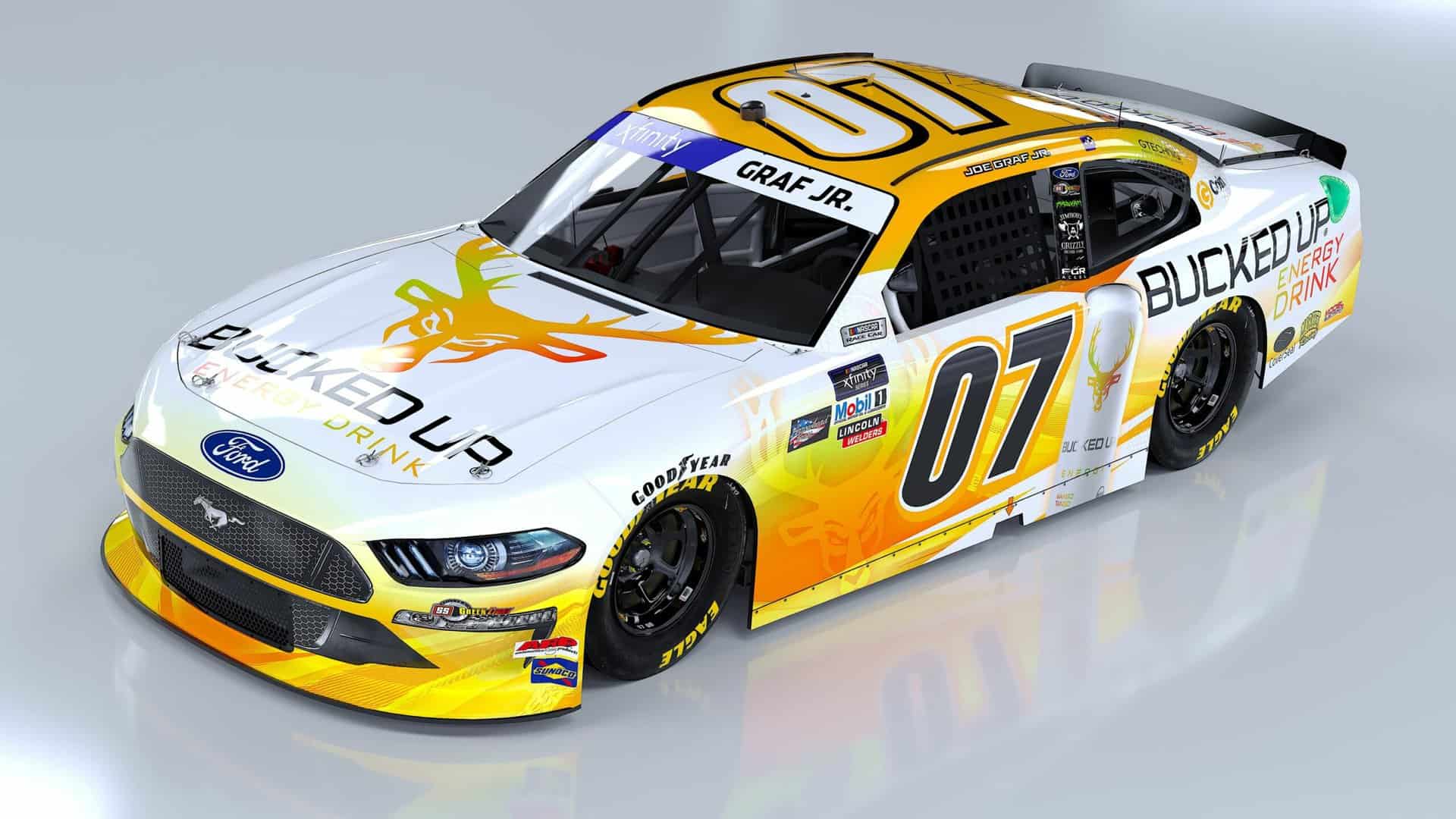 Full of Energy: Bucked Up Energy Drink and its sister products will continue their role as the primary partner of Graf’s No. 07 Ford Mustang this weekend. Richmond (Va.) Raceway is the fifth race of 2022 but is the 36th race overall in a multi-year, multi-race deal with the former ARCA Menards Series winner.

This weekend, Bucked Up will promote its Mango Tango Energy Drink.

Mango Tango tastes like a well-placed double entendre — two meanings, up to interpretation. Perhaps, it’s a melodic, upbeat fiesta of juicy goodness pulling sultry-sweet dance moves on your tongue. Or we could be using Tango as code, letting you decide the most fitting “T” descriptive word: tantalizing, tangy, tempting, titillating, tempean, or transcendental.

We leave it up to your trustworthy taste buds.

About Bucked Up Energy: Bucked Up started in 2013 when twin brothers Ryan and Jeff Gardner started marketing a product called Deer Antler Spray. After selling thousands of bottles to GNCs nationwide, the company morphed into what is now Bucked Up, a full-fledged vitamins and supplements manufacturer.

Low-stim has the same innovative ingredients that make their OG formula so powerful for focus, mood, motivation and energy. Bucked Up made just one small change and they have been surprised by the resulting epicness.

Boasting a modest of 100mg of caffeine, Bucked Up Low-Stim delivers the same energy, focus, mood, motivation – while reducing the common side effects that come from too-much caffeine, jitters, sleeplessness and anxiety.

Settling In: Richmond marks the seventh race that the SS GreenLight Racing with Jeff Lefcourt (SSGLRwJL) team embraces their manufacturer switch from Chevrolet to Ford while incorporating its technical alliance with Stewart-Haas Racing.

In addition to providing race cars to SSGLRwJL, SHR will also provide technical support for the entire 33-race season.

He holds an average starting position of 25.9 and an improved average result of 21.9 and has been running at the conclusion of 10 of the 11 races.

After successfully qualifying into the field based on his qualifying speed, Graf’s surge towards the top-20 was stalled at the end of Stage 1 when he lost two cylinders. For the remainder of the race, Graf would pilot his No. 08 G-Coin Ford Mustang on six of eight cylinders and salvaged a 34th place finish in his Circuit of the Americas debut.

He will crew chief his 72nd NASCAR Xfinity Series race as crew chief on Saturday and his fourth at the 0.875-mile short track.

Hello From The Other Side: Graf Jr. has a teammate at SS GreenLight Racing with Jeff Lefcourt. Veteran David Starr will drive the No. 08 TicketSmarter Ford Mustang on Saturday for his second start of the 2022 season.

Starr is set to make his 236th career NASCAR Xfinity Series start and 11th at Richmond Raceway. His best Xfinity track finish occurred in the 2017 ToyotaCare 250, where he finished 17th after starting 22nd for BJ McLeod Motorsports.

On Richmond Raceway: “I am excited about going back to Richmond Raceway this weekend and another opportunity to score a solid top-15 finish for everyone on this SS GreenLight Racing with Jeff Lefcourt team.

“Richmond is definitely a momentum race track, but I am confident in the setup that Joe (Williams) and the No. 07 Bucked Up Mango Tango Energy Drink team is bringing to the track this weekend and it will allow us no matter where we start to earn one our best finishes of the season thus far.”

On Circuit of the Americas: “I am proud of the efforts of everyone on our team. We knew we had to make the race based on our qualifying speed and we checked that off our list.

“I felt confident that once the race got rolling that I would be able to settle into a groove that would keep me on the track and progressing forward. Unfortunately, we lost two cylinders early in the race and just had to fight it out for the best finish possible.”

On 2022 Season: “I think we have showcased the speed in our SS GreenLight Racing with Jeff Lefcourt Ford Mustangs this season, but unfortunately we haven’t had the finishes to really back that up.

“We hope to change that pattern on Saturday afternoon. I’m proud of everyone on this team and we will continue to fight and produce the finishes I know we are more than capable of.”