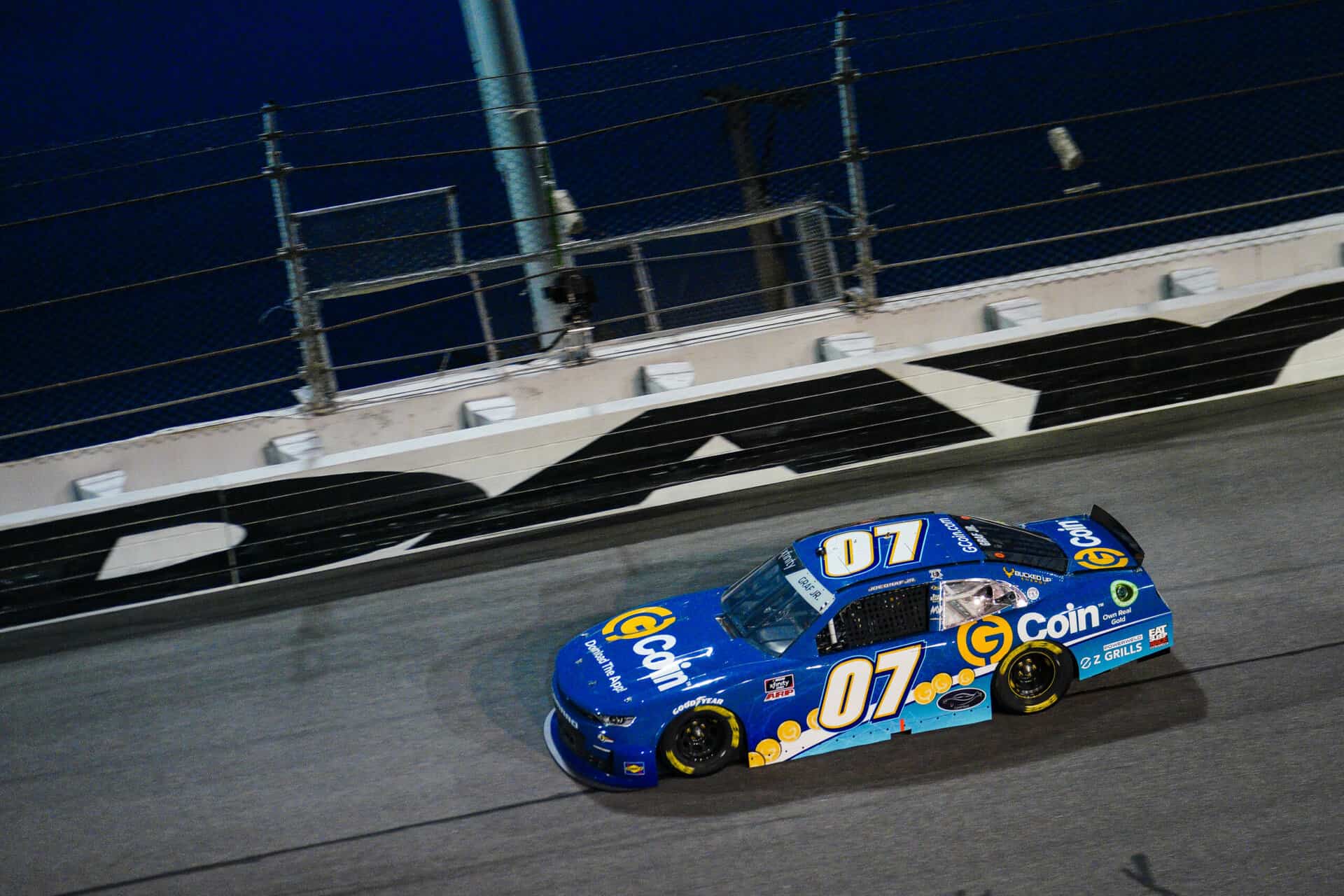 Talladega marks the ninth race of a multi-race deal where G-Coin, a product that brings gold into the digital age, making it accessible and giving it true utility will be the primary partner.

G-Coin Tip of the Week: A G-Coin token is a digital title of ownership to one gram of a Responsible Gold kilobar stored in a licensed vault.

Holders can redeem the tokens for physical gold on demand*. G-Coin tokens can be sent, spent, gifted or purchased as an investment through the G-Coin wallet.

Same Day Settlements With MoneyGram: G-Coin customers with Tier 3 access can use cash to buy or sell G-Coin tokens at participating MoneyGram locations.

To place a buy or sell order using cash, Tier 3 customers need to select the ‘MoneyGram’ option from ‘Pay With’ that appears on the buy | sell screen. Once the order is placed, customers will receive an email with detailed instructions to follow at participating MoneyGram locations.

For buy orders, customers will have 24 hours to make the payment in cash, which is when the balance on the G-Coin wallet is updated. Buy orders expire after 24 hours so customers will need to place a new order after that time.

For sell orders, customers are responsible for collecting the proceeds of the sale in cash at participating MoneyGram locations. The G-Coin balance will be updated when the sell order has been placed, which is irreversible.

New Sponsor Announcement: SS GreenLight Racing and Joe Graf Jr. will soon introduce a new marketing partner in the NASCAR Xfinity Series for two of the final six races of the 2021 season.

The new sponsor is also new to NASCAR and the Xfinity Series scene.

In Loving Memory: This weekend at Talladega and for the remainder of the 2021 NASCAR Xfinity Series season, Joe Graf Jr. and SS GreenLight Racing will carry the name of Bray Pemberton on the passenger side name rail of the team’s No. 07 Chevrolet Camaro.

Joe Graf Jr. Xfinity Series Talladega Superspeedway Starts: Joe Graf Jr. will make his fourth NASCAR Xfinity Series start at the 2.66-mile superspeedway on Saturday and looks to improve on his 33rd place finish from April’s Ag-Pro 300 where the SS GreenLight Racing experienced a mechanical failure in the rain-shortened event.

The margin was so narrow in the 69-year history of the series, it was a statistical dead heat, the margin of victory on the computerized scoring monitors showing 0.00 seconds. Only a video replay and the photo finish camera were able to determine Graf finished second by a matter of millimeters.

After starting 21st in his No. 07 Bucked Up Energy Chevrolet, Graf Jr. maintained his top-20 pace at the 1.5-mile speedway but was one of nearly a dozen victims in a Lap 30 restart incident.

The crash knocked Graf and the SS GreenLight Racing team out of the race with a frustrating 40th place finish.

In addition to Wise, Graf has also been working with former NASCAR driver and open-wheel driver Scott Speed on being more discipline behind the wheel of his No. 07 Bucked Up Energy Chevrolet Camaro.

He will crew chief his 60th NASCAR Xfinity Series race as crew chief on Saturday afternoon and his fourth at the 2.66-mile superspeedway.

In his previous 59 NASCAR Xfinity Series starts, he has collected four top-five and 14 top-10 finishes.

Hello From The Other Side: Graf Jr. has a teammate at SS GreenLight Racing. Veteran Garrett Smithley will drive the No. 17 Chevrolet Camaro on Saturday afternoon for his third start of the 2021 season.

Smithley, 29, is set to make his 140th career NASCAR Xfinity Series start and sixth at Talladega. His best Xfinity track finished occurred in the 2018 Sparks Energy 300, where he finished 10th after starting 34th for JD Motorsports with Gary Keller.

On Talladega: “I’m looking forward to Talladega Superspeedway this weekend being a little bit of a revival for our SS GreenLight Racing team. We have had incredibly fast speedway cars this season and other than Daytona, we haven’t been able to showcase that for circumstances beyond our control.

“I’m still a little upset that an opportunity to have another good finish at Las Vegas last weekend was robbed from us because we were swept into an accident that happened way too early in the race. Redemption is definitely on my mind Saturday afternoon.”

On Approaching Homestretch: “We have a little over a month left in the 2021 schedule. Our season has not gone the way we planned, but it has not been from a lack of effort, just a variety of circumstances – most beyond our control.