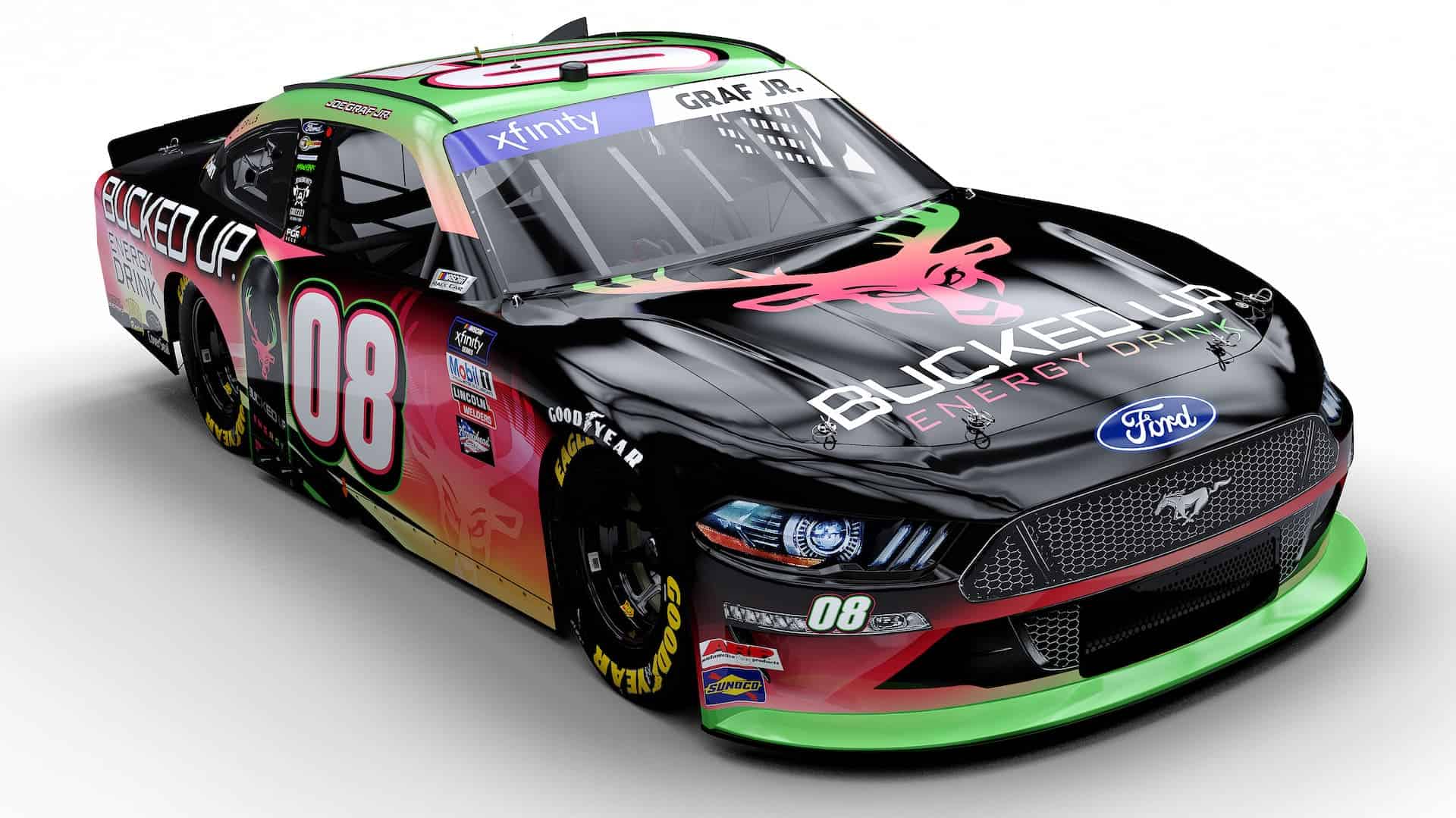 Full of Energy: Bucked Up Energy and its sister products will continue their role as the primary partner of Graf’s No. 08 Ford Mustang this weekend. Auto Club (Calif.) Speedway is the second race of 2022 but is the 33rd race overall in a multi-year, multi-race deal with the former ARCA Menards Series winner.

Bucked Up Energy Drink is the every man (or woman) energy drink. We don’t care about the color of your collar; whether blue or white, we all require energy to power our days.

We want something that tastes like success, enhances mood and focus, and most of all delivers long-lasting energy.

The company has gone from its humble beginnings to becoming the No. 1 best-selling pre-workout brand that’s available on their website and in over 10,000 stores worldwide, including GNC, Vitamin Shoppe, Walmart and many other stores nationwide.

Check Out The New Flavor: Bucked Up Energy Drink now offers more than 10 quenching options, but this weekend at Auto Club, SS GreenLight Racing and Joe Graf Jr. will feature its Strawberry Kiwi flavor with Graf’s No. 08 Ford Mustang infused with a pink and green livery.

Inspired by nuclear fusion, Bucked Up Strawberry Kiwi is an unparalleled source of energy and refreshment. We won’t get deep into the science, but in nuclear fusion, you get energy when two atoms join together to form one — the same reaction that powers the sun.

Conceptually, harnessing nuclear fusion in a reactor is a no-brainer. Except scientists have yet to concoct a controllable, non-destructive way of doing it. But we’re not scientists. We don’t think in reactors. We think in cans and flavors.

With Bucked Up Energy Strawberry-Kiwi, we fused two delicious flavors to form one. The result — a zero sugar, solar-sweet source of energy so abundant the world might actually start revolving around you.

New Year, But New Look: In January, SS GreenLight Racing announced the organization would switch from Chevrolet to Ford and have a technical alliance with Stewart-Haas Racing.

In addition to providing race cars to SSGLR, SHR will also provide technical support for the entire 33-race season.

Additionally, Graf will have NASCAR Cup Series and Stewart-Haas Racing drivers Cole Custer and Chase Briscoe as teammates for select events throughout the 2022 season – including this weekend at Auto Club Speedway.

Surprise Awaits: Joe Graf Jr., SS GreenLight Racing with Jeff Lefcourt and Bucked Up Energy will showcase a new product for the organization next weekend at Las Vegas (Nev.) Motor Speedway for the Alsco Uniforms 300, the third race of the 2022 NASCAR Xfinity Series season.

In his rookie season before the pandemic, Graf qualified 22nd – but suffered mechanical issues during the race that relegated him to a 31st place finish aboard his No. 08 Core Development Group Chevrolet Camaro.

Auto Club is the sister track to Michigan International Speedway, another 2.0-mile circuit where Graf also has one Xfinity Series start in 2021.

Joe Graf Jr. Xfinity Series Speedway Nuggets: At tracks greater than 2.0-mile in size, Graf has competed in 15 NASCAR Xfinity Series races with one top-10 finish. He holds an average starting position of 25.7 and an average result of 29.5.

He will crew chief his 253rd NASCAR Xfinity Series race as crew chief on Saturday and his seventh at the 2.0-mile speedway.

In his previous 252 NASCAR Xfinity Series starts, he has collected two top-five and eight top-10 finishes.

Hello From The Other Side: Graf Jr. has a teammate at SS GreenLight Racing. Veteran Cole Custer will drive the No. 07 Production Alliance Group | Bucked Up Energy Drink Ford Mustang on Saturday evening for his first Xfinity start of the 2022 season.

Custer is set to make his 106th career NASCAR Xfinity Series start and fourth at Auto Club (Calif.) Speedway – Fontana. His best Xfinity track finished occurred in the 2019 Production Alliance Group 200 where he won the race after starting third for Stewart-Haas Racing.

“I remember the track being very fast but the seams definitely can make negotiating the two-mile track somewhat treacherous. We must capitalize on practice and get ourselves a solid starting spot that will put us in a good position for the race.

“I’m proud of our team for showcasing speed during the race last weekend at Daytona and hope we can continue that not only in Fontana this weekend but the entire west coast swing.”

On Teammate Cole Custer: “I’m excited to have Cole (Custer) a part of the SS GreenLight Racing team. Obviously, he is a former winner at Auto Club, so I think he could put the team in a position to do that again.

“I believe Cole not only can bring a lot of good communication, ideas and strategy but also help us accelerate the continued transition from Chevrolet to Ford.”

On 2022 Season Outlook: “We have made a lot of changes during the offseason. From switching manufacturers to bringing in new personnel, it’s all for the better. Honestly, I would be disappointed if we weren’t able to showcase ourselves a strong capable team throughout the season.

“Top-10 finishes should not be out of the question and hopefully by Phoenix in November, we will be racing near the front on a consistent basis.”

SS GreenLight Racing will continue with a two-car program in the NASCAR Xfinity Series in 2022.